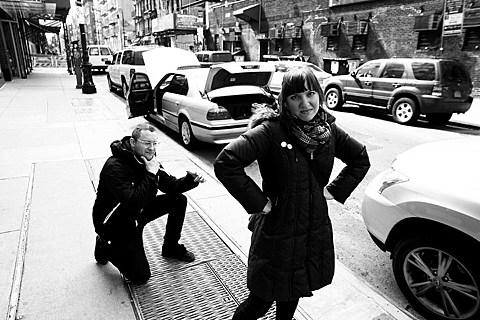 Bethlehem, PA duo Slingshot Dakota haven't played NYC in about a year but that will change when they play Muchmore's tonight (7/16) with Living Room, Bethlehem Steel and Downies (mems of LVL UP and Porches). Show starts at 8 PM and $6 gets you in. Their only other date at the moment is an acoustic show in Kansas City.

Slingshot Dakota recently contributed to Part 1 of the three-part blink-182 tribute album that Enjoyment Records is putting out called I Guess This Is Growing Up. They took on "Stay Together For The Kids," and if you were ever wondering what Blink would've sounded like if they went in a Rilo Kiley/Ben Gibbard direction, this might give you an idea. Stream that below. Slingshot Dakota's last LP was 2012's Dark Hearts which came out on Topshelf. It's got a few Mates of State and The Anniversary vibes and if you're unfamiliar, check out one of the standout tracks below as well.

Another Topshelf-signed husband/wife duo who make slightly-emo indie pop, Empire! Empire! (I Was A Lonely Estate), will also be contributing to one of the to-be-released parts of the blink-182 compilation. (Once the whole thing is done, it will be out on vinyl.) They're also in NYC tonight, opening the acoustic Early November tour which hits The Studio at Webster Hall. Tonight's show also features The Color & Sound and tickets are still available.

When we last spoke, we mentioned that Empire! Empire! hadn't released an album since their 2009 debut, but it's since been announced that they'll finally put out their sophomore LP, You Will Eventually Be Forgotten, on August 19 via Topshelf/Count Your Lucky Stars. Check out the artwork, tracklist, and first single, "If It's Bad News, It Can Wait," from that album, below.

Slingshot Dakota - "Stay Together for the Kids" (blink-182 cover) 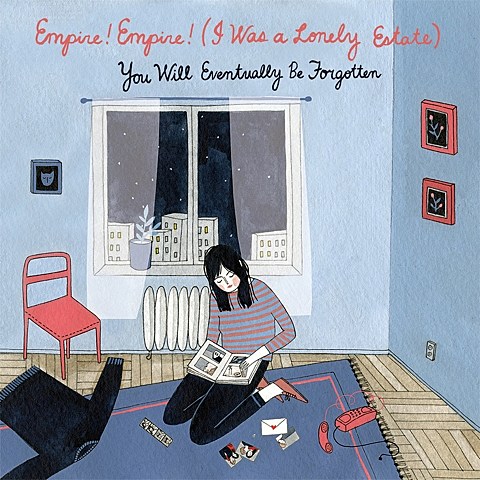 Tracklist:
01) Ribbon
02) I Was Somewhere Cold, Dark... and Lonely
03) We Are People Here. We Are Not Numbers
04) A Keepsake
05) You Have to Be So Much Better than You Ever Thought
06) Stay Divided
07) Foxfire
08) Things Not Worth Fixing
09) If It's Bad News, It Can Wait
10) It's So Much Darker When a LIght Goes Out than When It Would Have Been If it Had Never Shone
11) The Promise That Life Can Go On No Matter How Bad Our Losses