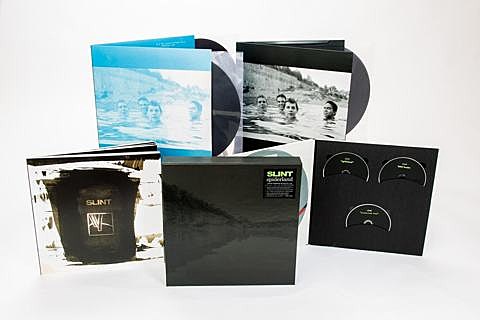 Slint are one of those classic-era indie rock band whose small catalog punches way above its weight. Though they only recorded two LPs and an EP, their work -- especially Spiderland -- remains a touchstone for both fans and critics, and has only grown in reputation in recent years. People still talk about their 2007 reunion shows.

Deeming (probably accurately) that there's more hay to be made from Spiderland's legacy, Touch and Go Records have announced that they're releasing a deluxe box set version of the album on April 15. For once, this box set is credibly deluxe; the album itself has been remastered, and the set comes with a host of fresh goodies for obsessive nerd types (AKA most of Slint's fanbase). Here's the skinny:

A 104 page book with over 100 never-before-seen photos documenting Slint's entire history, as well as lyrics to the songs on Spiderland, and a foreword by Will Oldham

CDs of all the music: remastered Spiderland on one CD and the 14 bonus songs on a second CD

All packaging printed in the USA at Stoughton, including heavyweight, "tip-on" gatefold LP jackets

I'm not totally sure that Spiderland really needs a remaster, but the rest of this stuff looks pretty sweet. The demos include a few tunes that never properly made it to album, and both the photo book and the documentary have potential to be interesting. You can preorder the box set here; if you nab it before March 8, it comes with a free t-shirt. A limited number have also been signed by the band and appear to be available for preorder at no extra cost.

Touch and Go have put together a Youtube video that shows off the contents of the box set. Check that and the track listing below...