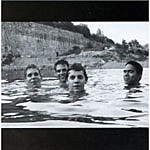 "Basking in the glory of Slint's classic Spiderland in its entirety will no longer cost Americans an arm and a leg (or at least an overseas plane ticket). Thanks to the great folks at All Tomorrow's Parties, Brian McMahan, Britt Walford, and David Pajo will bring their masterpiece to New York City for two shows this July." [Pitchfork]

Touch & Go says, "People are starting to ask us about a new album from Slint. Here's the deal. Slint has been preparing for shows this summer. They want to play music together and have decided to work on new material. Once they find a rehearsal space (in Louisville, KY), they can begin this process. Please do not start rumors about an impending Slint recording. Anything new will take a while. With a little luck, Touch and Go will have something to release in the next few years."