help us name this new column in the comments! 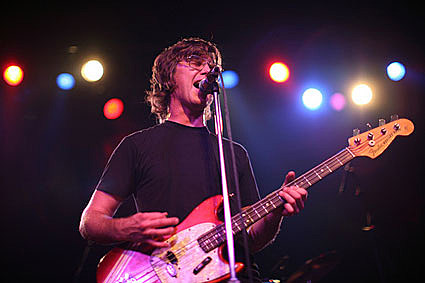 In Pitchfork's review of 2004's Action Pact, Alex Linhardt wrote, "Sloan is not anyone's favorite band." He'd obviously never been to a Sloan show. People are nuts for them. Sloan fans are obsessive, protective and they stand by them even when they make a less-than-great album (cough cough Action Pact).

There are a number of reasons for this. For all the success they've had over their 17-year carreer, Sloan are an anomaly. All four members of the band write and sing, each with distinctive styles, which makes them nearly impossible to categorize. And they usually change their sound from album-to-album, reflecting what they've been listening to - which was, more often than not, out-of-step with what everyone else was doing at the time.

Here's a band that started off being called the Canadian Nirvana (though really they were more the Canadian My Bloody Valentine) on the release of their first album, Smeared, but have channel-flipped over the years from Beatlesque and other '60s pop to Thin Lizzy style cock rock, '70s AM Gold, pop-punk, etc, etc, etc. It does not make for casual fans. It breeds obsessives, though. For all the style-hopping, it's those four good songwriters and musicians behind it all that make it work.

The real reason I think fans stick by them is their live shows. Sloan are one of the most consistently awesome live bands of the last 15 years. They know all the Rock Moves by heart and know how to use them without being self-consciously showy, although bassist and defacto leader Chris Murphy is a real ham who isn't afraid to do something retarded (like lick the mic stand) in the name of a laugh or good crowd reaction. He also does an amazing Keith Moon impersonation (all fills, all the time) behind the kit when regular drummer Andrew Scott comes forward to sing his songs.

And with nine albums under their belt, including the just-released Parallel Play (which is really good and you can stream the whole thing ), you're bound to get a cherry-picked setlist with at least a handful of classic Sloan fist-pumpers like "Iggy & Angus," "Losing California," "Money City Maniacs"... and maybe even "Underwhelmed" which is kind of their "Smells Like Teen Spirit" and at least some of the band loathe it but I think still holds up.

But don't just take my word for it. Sloan are playing Bowery Ballroom this Thursday (tix) and Friday (tix) and if you've never seen them, I suggest you rectify that immediately. Neither show is sold out. I really don't think you'll be sorry if you do. If you care to read more about them, I've got at least three concert reviews on Sound Bites. If it's not made clear, I am a Sloan superfan. All dates at the end of this post.

I have Sloan on the brain, but I am aware there is other cool stuff going on......

I'm hoping after the Thursday show at Bowery I can scoot over to Santos Party House for the Vice party with Vivian Girls and Muslims, the latter of whom I am determined to see this week. I'm currently addicted to the Muslim's debut album. We'll see if that works out. If not, I've got a couple other chances to see them. 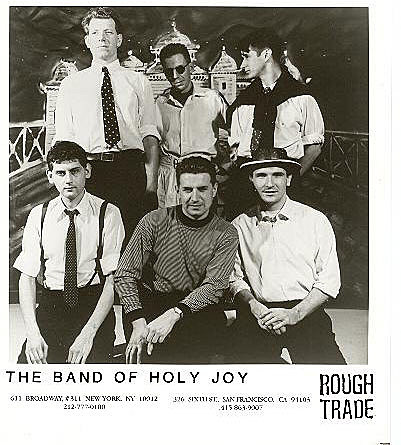 One notable thing I missed for last week's column (but was alerted to by the Big Takeover's Jack Rabid) was that UK indie legends Band of Holy Joy are in town playing their first-ever U.S. shows in thier 25-year career. I was more of a casual fan than anything else but here's a quote from the press release:

Formed in London in the early 1980s by singer/lyricist Johnny Brown, The Band of Holy Joy are something of a theatrical analogue to Poi Dog Pondering, the Pogues and Dexy's Midnight Runners. They are a large and loose ensemble of varied semi-acoustic instrumentation - fiddle, accordion, harmonium, piano, trombone - that creates idiosyncratic music in a number of nostalgic traditions. With nods to early English folk, 1976-era punk rock, cabaret, busking and dark literature, BOHJ's music is at once emotional and articulate,rustic and unpredictable.

Band of Holy Joy play Southpaw on Thursday (June 19) (tix) and an early show at Maxwell's (tix) on Friday.

And the After the Jump Fest extravaganza on North 6th St. in Williamsburg seems awful hard to pass up for $10 (which goes to charity) -- it's quite a line-up.

And though they were never my thing, I know a lot of people who are excited about the Polvo reunion shows this weekend.