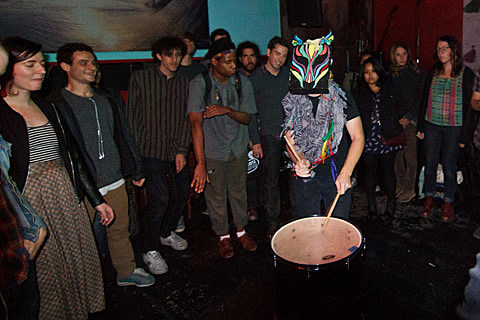 Enigmatic artist Slow Magic was one our pleasant discoveries at CMJ 2012. We caught him at a day party set at Pianos and his laptop-and-drum setup (while wearing a big mask) was more alluring that we expected. His recorded music is pretty enticing too, especially if you still have a place in your heart for the genre formerly known as chillwave, though if his most recent single, the slinky "On Yr Side," is any indication, he's moved past that as well. Slow Magic is working on a new album as we speak but you can stream "On Yr Side" and other previoulsy-released tracks below.

Slow Magic will be leaving his mysterious mountain home to tour this spring, which will kick off in Austin for SXSW and will eventually make its way to NYC for a show at Glasslands on April 24. Tickets for that show go on sale Friday (2/22) at 7 AM. So, um, set your alarm. All tour dates are listed below.