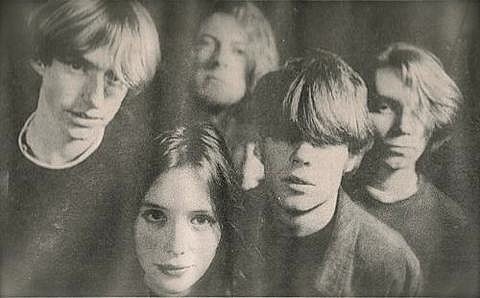 The big news with yesterday's Primavera Sound 2014 line-up announcement (for me at least) was the return of shoegaze vets Slowdive. The band broke up 1995 right after the release of their third album, Pygmalion, and there have been rumors floating around for some time, fueled last fall by Rachel Goswell performing a few Slowdive songs acoustically with Neil Halstead in London. When an official Slowdive twitter account appeared a few weeks ago, reunion speculation went into overdrive. And here we are.

The Quietus just published a feature, interviewing both Hallstead and Goswell (who continued after Slowdive as Mojave 3) about the reunion and what's to come. The band decided to reform last summer and have been quietly putting pieces in place since, and had their first practice a couple weeks ago. "We were surprisingly good," says Hallstead. "Quite a few of the songs came back quickly."

As for what to expect, Halstead says, "We will definitely be playing some stuff from Pygmalion, as we never got to play that record live before. I think the live set will be a pretty fair reflection of our career and our hits - or not hits as they were." Goswell adds, "We were young and naive; we had terrible management and a terrible accountant who ended up in prison. The business side of it was a complete mess. But this time round we're 20 years older and we want it to be fun and to enjoy it."

The revelation in this feature is that proceeds from the reunion shows will go towards funding a potential new album. "I hope we can do it," says Goswell. "I think it will be a bit of a slowburner, but the potential is there."

The only other show Slowdive have currently on deck is an ATP-presented gig at London's Village Underground on May 19. But expect more. And hopefully some in North America, too.

With an ethereal vibe more akin to Cocteau Twins, Slowdive never had the popularity of My Bloody Valentine or even Ride -- they were mostly hated by the UK music press at the time -- but their albums and EPs have held up remarkably well and have grown in reputation. You can listen to their three albums at Rdio and stream a few choice cuts below...

Slowdive - When the Sun Hits