Sly Stone in the earlier days 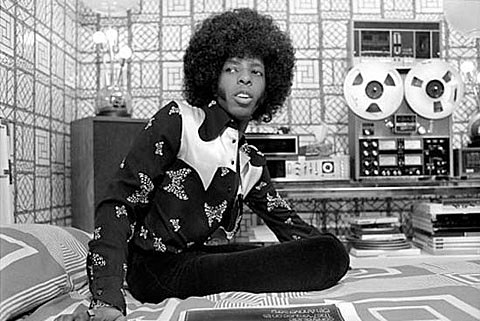 In his heyday, he lived at 783 Bel Air Road, a four-bedroom, 5,432-square-foot Beverly Hills mansion that once belonged to John Phillips of The Mamas & the Papas.

The Tudor-style house was tricked out in his signature funky black, white and red color scheme. Shag carpet. Tiffany lamps in every room. A round water bed in the master bedroom. There were parties where Stevie Wonder, Jimi Hendrix, Janis Joplin and Miles Davis would drop by, where Etta James would break into "At Last" by the bar.

Just four years ago, he resided in a Napa Valley house so large it could only be described as a "compound," with a vineyard out back and multiple cars in the driveway.

But those days are gone.
Today, Sly Stone -- one of the greatest figures in soul-music history -- is homeless, his fortune stolen by a lethal combination of excess, substance abuse and financial mismanagement. He lays his head inside a white camper van ironically stamped with the words "Pleasure Way" on the side. The van is parked on a residential street in Crenshaw, the rough Los Angeles neighborhood where "Boyz n the Hood" was set. A retired couple makes sure he eats once a day, and Stone showers at their house. The couple's son serves as his assistant and driver.
Inside the van, the former mastermind of Sly & the Family Stone, now 68, continues to record music with the help of a laptop computer. -[NY Post]

Let's hope that this is the bottom of an arc towards a triumphant return for the funk/soul legend.