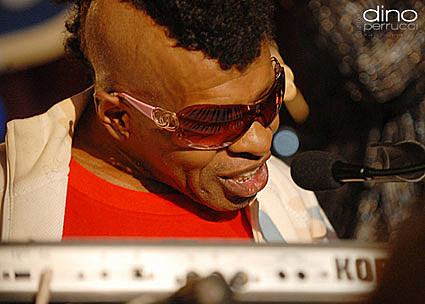 As the horns blare with a syncopated rhythm and singers call to the crowd of about 1,000 to dance, a hunched man hidden in the wings of the stage smiles broadly, watching his band like a proud father.

After decades away from the spotlight, Sly Stone has returned to the stage with his band Sly and The Family Stone, performing in Europe this summer and this week making his first New York appearance in 32 years.

Dressed in a white sweatsuit trimmed in silver, sunglasses and Mohawk hairstyle, Stone fills the club with his rich, mellifluous voice as the band spends an hour cycling through their greatest hits, including "Everyday People," "Family Affair" and "Stand." [Reuters]

Some important points:
* Multiple people have said the late show was better
* There were three original members
* You have two more NYC chances to see them