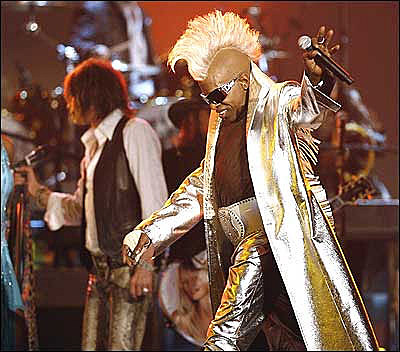 Sly & the Family Stone was an American funk, soul and rock band from San Francisco, California. Active from 1966[1] to 1983, the band was pivotal in the development of soul, funk, and psychedelic music. Headed by singer, songwriter, record producer, and multi-instrumentalist Sly Stone, and containing several of his family members and friends, the band was the first major American rock band to have an integrated lineup in both race and gender. [Wikipedia]

You can keep reading the Wikipedia entry for more of their history since then, but more importantly - what have Sly and his Family Stone been up to recently? Well, in 2006 Sly made a rare appearance at the Grammys.

And even more recently (as you can see from their official website), S&TFS re-released their entire catalog, and came out with a new "Best Of" album this summer. Along with that came an interview in Vanity Fair, a 9.5 on Pitchfork, and a short European tour. How did that go? Well,...

...After spending only 20 minutes on stage at the Montreux Jazz festival in Switzerland last week, the 64-year-old musician performed only four and half songs during his latest gig in the southern French city of Nice.

True to his reputation as an unpredictable, combustible character, he walked off stage after 10 minutes leaving his backing band, known as the Family Stone, to keep the audience entertained.

Half and hour later, the brooding singer, hidden behind big sunglasses and baseball cap, reappeared to sing for another 10 minutes before disappearing for the final time. [the raw story - July 21, 2007]

You get the picture. What next?

Sly and The Family Stone are playing BB King's in NYC on December 7, 2007 - their first NYC show in 33 years (or so I'm told). There's going to be a presale on Friday, and a public sale next week. Stay tuned.