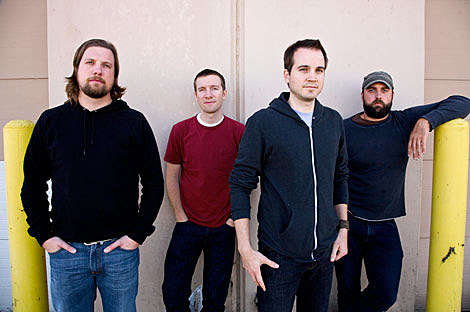 ...To make a long story short, the original lineup (Mike, Ben, Travis, Dan) is back together and working on new music. Over the last few months we've been writing a ton of new stuff and currently have about ten new songs finished plus a bunch more in various stages. We're all really excited about how it's going. So far, so good!

The bottom line for us is to have fun, write music, and play a few shows here and there. Just like we did when we started the band. Keep it simple.

Up until Oct 2009, Small Brown Bike's last release was in 2003. That all changed with the release of the Composite, Volume One 7" on No Idea Records (pick up a copy and stream the whole thing here). Since then, they've played a handful of shows including an appearance at The Fest in Gainesville, Fl.

Going forward, the band currently has two dates on their calendar, and one is in NYC on May 14th at Cake Shop with Bridge & Tunnel and Your Skull My Closet. Tickets are on sale.

The other show is at Harvest of Hope Fest in Florida along with Torche and Leatherface. Coincidentally, Leatherface will team up with Bridge and Tunnel as well, with a string of east coast dates lined up including Knitting Factory on 3/5. Tickets are on sale.

The 2009 Small Brown Bike lineup matches the band's 1996 lineup which means no Jeff Gensterblum currently the drummer of Your Skull My Closet. YSMC recently recorded a new EP and played Europa with Coliseum, A Storm of Light & Coalesce on 12/30.

Scott Flaster is also an ex-member of SBB, and you can find him either playing with his new (and great) band Millions or running the great Seventh Rule Recordings.

Tons of Small Brown Bike videos are below....