Smashing Pumpkins at Terminal 5 in 2010 (more by Jen Maier) 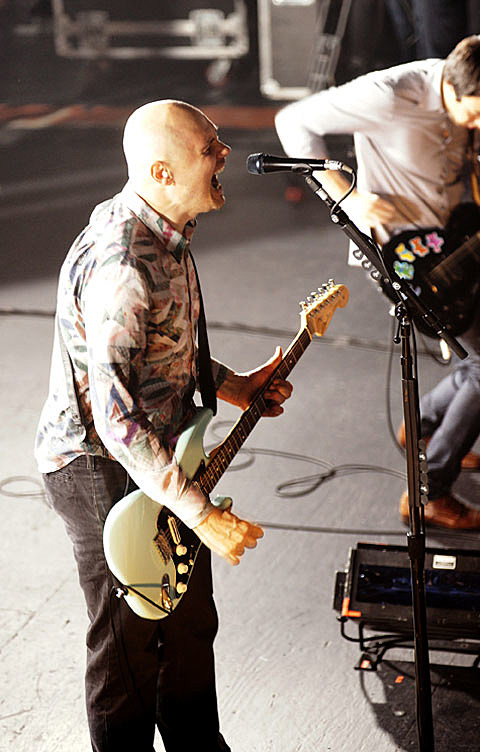 The Smashing Pumpkins (aka Billy Corgan and some other people) have a lot up their sleeves for the next few months. For one, they're reissuing all of their pre-breakup albums, despite Billy's feelings on nostalgia. They plan to reissue the material over the course of the next three years, starting with a reissue of the first two albums Gish and Siamese Dream on November 15 via EMI. Reissues of Pisces Iscariot, Mellon Collie and the Infinite Sadness, The Aeroplane Flies High, and Adore are due out in 2012 and the Machina albums will be reissued as a set with a greatest hits album in 2013.

Billy, who thinks albums are no longer relevant and instead began working on the Teargarden by Kaleidyscope project, where the band will release individual songs and compile EPs of every four songs, is also working on a new Smashing Pumpkins LP, Oceania. He recently spoke to Musicradar about how the new album might come off as a contradiction:

I still stand by my view that I don't think albums are particularly relevant at this time. That may change. But as far as making music... Nobody I know listen to albums anymore. Nobody. I don't care if they're 20 or 55. But for me, from a writing point of view, it's really going to focus me to put a group of songs together that are supposed to go together.

It's been a while, so I'm looking forward to making one cohesive statement, the idea that you can say something bigger with a group of songs. And if it pushes me harder to write better music, and people only end up listening to the three best songs, I can live with that. In the past that would have really pissed me off.

The one-song-at-a-time thing has, in many ways, turned this into a singles format. It puts so much pressure on the one song we're releasing, and people then read more into it than they should. For instance, why would we release, say, a cool B-side when we're going to get 50,000 people on Twitter saying, 'This song sucks!'? Maybe they don't get the joke of why we put it out. So I'm really looking forward to getting into some deeper material, and maybe the seventh-best song on Oceania, if it was put up by itself on the internet, it might not get the proper look that it could when it's grouped in with other songs.

Oceania is set to come out in early 2012 and the tracklist is below. The album is putting the plans of releasing individual songs on hold. The most recent song the band did was "Owata," which was finished earlier this year. You can watch the video for that track below.

The Smashing Pumpkins are going on a short tour in October while they prepare a larger one for 2012. They're reportedly playing "material off Oceania, classics, and deep cuts." The tour is with Fancy Space People (featuring Don Bolles of The Germs, Celebrity Skin, 45 Grave) and Light FM (featuring current Pumpkins bassist Nicole Fiorentino). They'll play NYC on October 18 at Terminal 5. Tickets go on sale Friday (8/19) at 10 AM. All dates below...