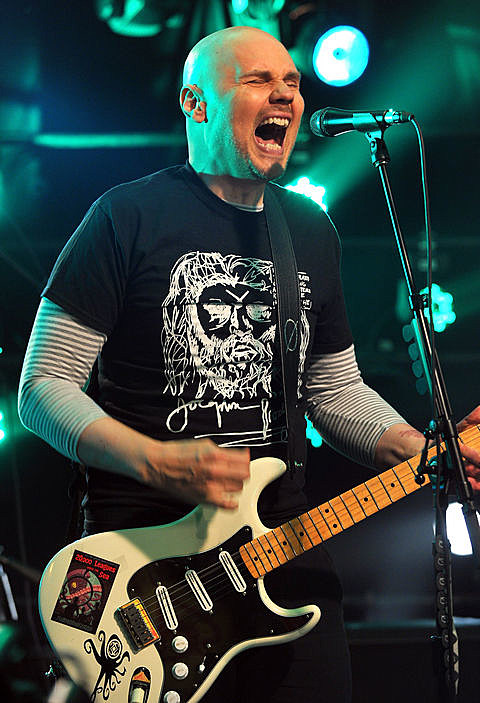 Back in June, The Smashing Pumpkins released Oceania, their first full length album since 2007 and first with the band's current lineup of Billy Corgan, Jeff Schroeder, Nicole Fiorentino, and Mike Byrne. Around that time they also played a few shows in support of it including the tiny iHeartRadio Theater show in NYC. Now they're set to take the album to much larger venues on 'The Oceania Tour,' where they'll be performing material from the "new album Oceania as well as their classic songs." The Canadian leg of the tour has already been announced, and the band have revealed the US cities (but not venues and dates) that they'll hit as well. A full list of venues and dates is to come, but meanwhile, we know that they'll be in NYC for a show at Brooklyn's new Barclays Center on Halloween (10/31). (We'll leave you to make holiday/name-appropriate jokes.) Tickets for that show go on sale Friday, August 31 at 10 AM, and Citi cardmembers will have access to presale tickets on Monday, August 27 through the Citi Private Pass website. VIP tickets will also be available at the Smashing Pumpkins website. A list of all dates and US cities (including Camden, NJ, where the Susquehanna Bank Center is located) is below.

In other news, after recently calling out Radiohead, Billy Corgan took to an interview with PhilStar to call out some of his old favorites, Soundgarden (and of course another mention of Pavement). Billy said:

There are those bands that are essentially coming back only to make money -- playing their old albums, and maybe somewhere in the back of their minds they're thinking there might be a future.

I am not in that business, obviously. I condemn anybody who's in that business but doesn't admit (he's) in that business. When Soundgarden came back and they just played their old songs, great. I was a fan of Soundgarden, but call it for what it is. They're just out there to have one more round at the till; same with Pavement and these other bands.

In related news, ex-Smashing Pumpkin James Iha will be going on his own tour this fall and coming to the NYC area on October 5 at Mercury Lounge (tickets) and October 6 at Maxwell's (tickets).

A list of all Smashing Pumpkins dates and a video of the band playing "The Celestials" at iHeartRadio Theater in June are below.