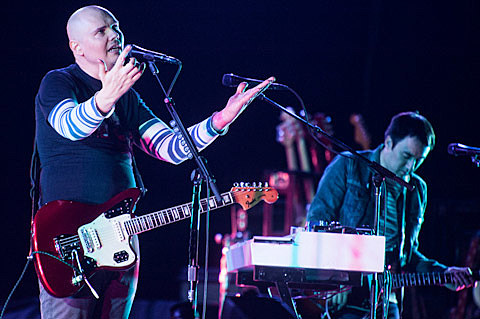 You've already heard two songs from Billy Corgan's new Smashing Pumpkins album with Tommy Lee on drums, and now a third called "Tiberius" has come out, via Vice. It's the poppiest of the three, as you can hear for yourself below.

Meanwhile, Corgan and current Pumpkins guitarist Jeff Schroeder joined former New Order/Joy Division bassist Peter Hook at the Chicago stop of his tour playing New Order albums on Saturday. (The Smiths' Andy Rourke joined him in NYC for "True Faith.") They assisted him on lead vocals for a version of Joy Division's "Love Will Tear Us Apart." You can watch a video of that, via NME, below.