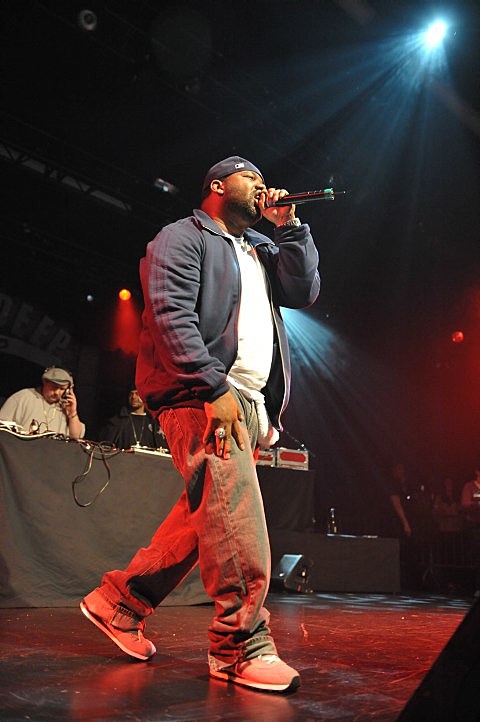 Raekwon will headline Prospect Park Bandshell on Saturday (7/9 @ 7:30pm) featuring an impressive lineup of Smif-n-Wessun, Joell Ortiz, Large Professor & Neek The Exotic, and more. There is a suggested $3 donation to get in to the (free) Lyricist Lounge-sponsored Celebrate Brooklyn show.

While on the subject of Smif N Wessun, the crew joined Pete Rock in a protest earlier this week at City Hall regarding the incident following the Monumental release party at Tammany Hall. General Steele of Smif N Wessun also sat down with Planet Ill to discuss the madness:

As an artist with a socially conscious solo catalog, why was this the wrong show for the police to show out at?

General Steele: Oh yeah. Well they didn't know that; they didn't do their homework. And what I found out was after this event, after the melee they caused, they started going to clubs. I forget what the particular names of the clubs were, uh... UG Lounge, in L.E.S. [(CultureFix is one of them)] Why they would go there is beyond me, maybe they're the hub for criminals or something, but they went there asking about us. Inquiring about "what is these guys, who are they connected with? What is their real thing, what can we dig up on these guys?"

And to think about that is crazy to me.

In other news, Raekwon and Nas recently teamed up for the track "Rich And Black" from Rae's new album Shaolin vs. Wu-tang. That song now has a video and related behind the scenes footage courtesy of LRG Films. Watch it all below.

Nas more recently teamed with Common for "Ghetto Dreams" from Com's forthcoming Warner Brothers release The Dreamer, The Believer. The just-released track can be streamed below and bought on iTunes.

AS announced, Nas and Damian Marley play Central Park Summerstage on 8/11. The show is still happening and tickets are still on sale, though the pair's show at Merriweather Post Pavilion (outside of DC) with The Roots, Chuck Brown and others has been cancelled. Chuck Brown however is also coming to NYC for some shows including one on the same stage Raekwon is playing this weekend in Prospect Park.

And last but certainly not least, Raekwon's partner in crime Ghostface Killah has a bit of legal trouble on his hands all of a sudden over his classic 2000 LP Supreme Clientele.

Urbont is a veteran actor and producer on Broadway as well as the creator of theme music for Guiding Light, One Life to Live, General Hospital, as well as music for That 70's Show, Oprah, 20/20 and The View. He earned an Emmy for Lorne Greene's New Wilderness and won BMI's TV/Film Pioneer award in 1986.

... According to the complaint: "Defendant Ghostface is also known for the nickname, 'Tony Starks,' which is a take-off of the name 'Tony Stark,' Iron Man's real name and true identity. In this way, Defendants' use of Urbont's 'Iron Man Theme' gives them a substantial commercial advantage by linking Ghostface to Iron Man without paying for it." -[Hollywood Reporter]

While you ponder this lawsuit, Boing Boing has a fascinating piece on how Paul's Boutique would lose $19.8M in sales if it followed today's copyright law.

Raekwon feat. Nas - Rich And Black behind the scenes