Smith Westerns at MHOW in October (more by Toby Tenenbaum) 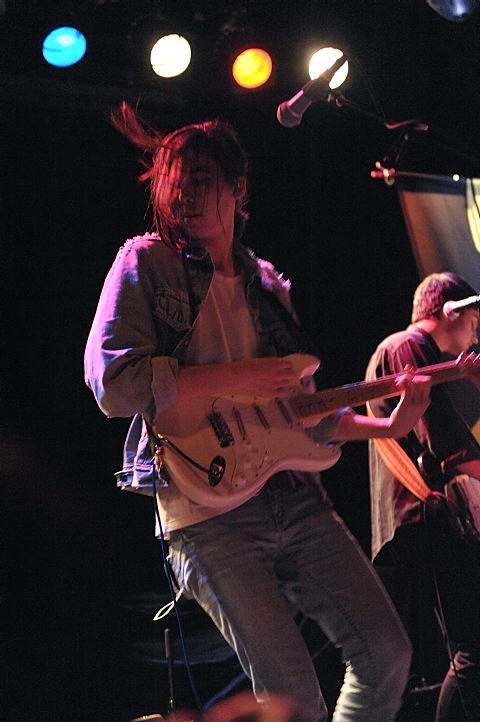 After releasing their sophomore LP Dye It Blonde at the beginning of this year, Smith Westerns have gone on a number of tours in support of it, most recently opening for Arctic Monkeys which culminated in a MHOW show at the end of last month. They'll continue in 2012 with a headlining tour that will bring the band back to NYC on January 31 on Webster Hall with Porcelain Raft and Bleached. Tickets go on sale Friday (11/18) at noon with an AmEx presale starting Wednesday (11/16) at noon. Other dates on this tour haven't been revealed yet, but the tour announcement should come soon. Meanwhile those from the band's hometown of Chicago can catch them for free on 12/2 at the Hard Rock Hotel.

Speaking of Porcelain Raft (aka Mauro Remiddi), he recently signed to Secretly Canadian and will release his debut full length, Strange Weekend, on the label on January 24. You can stream album track "Put Me to Sleep" below, along with the album's tracklist. The show with Smith Westerns takes place during a break in Porcelain Raft's European tour with M83. All Porcelain Raft dates are listed below.

All dates, song stream, and tracklist below...

Porcelain Raft - Strange Weekend Tracklist:
1 Drifting In and Out
2 Shapeless & Gone
3 Is It Too Deep for You?
4 Put Me to Sleep
5 Backwords
6 Unless You Speak From Your Heart
7 The End of Silence
8 If You Have a Wish
9 Picture
10 The Way In