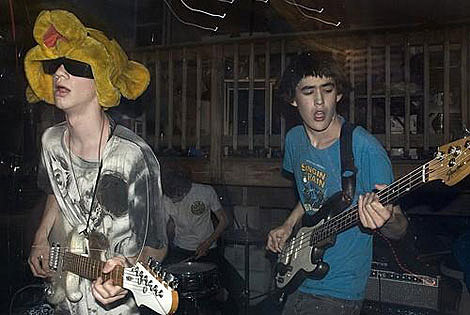 Last night (8/3) I went to the semi-secret Los Campesinos!/Girls show at Union Pool and both bands were great. This was a warm-up gig for their North American tour ("Welcome to our rehearsal," joked lead singer Gareth), which officially launches tonight at Webster Hall. (Tickets are still available.) As mentioned previously this will be the last Los Campesinos tour to feature singer/keyboardist Aleks, though they made no mention of that last night -- It was all smiles and glockenspiels and shouted choruses. Losing Aleks is definitely going to change the band dynamic, so do go see them on this go-round if you can.

And get there early for the openers, too. Last night was the third time I've seen Girls in the last two months and my only complaint was their set was too short. I wrote this when they played Mercury Lounge back in June:

Sometime in the last twelve months, Girls got good. They were good last July when I saw them at both Market Hotel and Glasslands, but but there was a ramshackle vibe that felt like they weren't sure whether they were really ready to leave the bedroom. But at Mercury lounge they are really good. Like "Whoa what happened" good. Credit new drummer (all loosey-goosey Keith Moon fills) and a nimble-fingered lead guitarist for the transformation. Christopher Owens and Chet White have always had the songs, mind you. In a lot of ways Girls are the ultimate San Francisco band: the laid-back vibe, the folky jammy-ness that has always been present there, as well as the neo-psych scene that has popped up over the last ten years. But Girls are working on a whole other plain of dreamy, hazy beauty and noise.

Opening the show are Chicago's Smith Westerns who are all still teenagers but have just put out a promising debut album on the HoZac label and also served time as Nobunny's backing band. While basically making the kind of adenoidal low-fi indie that's popular your DIY clubs around the nation, Smith Westerns add a big dollup of '70s glam to their sound which definitely differentiates them from the pack. That and some pretty strong songwriting. Pitchfork interviewed them recently:

Pitchfork: You're all under 21 Does that make playing shows in clubs tough?

Cullen Omori: Yes and no. You can't really go to a show and expect that you're going to be able to drink there. They're really strict about it. We have no problem getting shows, but it just sucks because you just sit around without being able to drink.

Pitchfork: When you're as young as you guys are, how do you learn about garage rock?

CO: We got Nuggets from one of my parents' old friends. We were making music, and it was just awful punk music. And he's like, "Well, you know, it sounds like this. So here, listen to this." And so he gave us Nuggets and Back From the Grave stuff. And that's how we went about making it. It was just, like, straight that. And then we started listening more to David Bowie and Marc Bolan, T. Rex kinda things. [Pitchfork]

If you can't make any of their dates with Los Campesinos and Girls, Smith Westerns will be back on a tour of their own in about a month. Full tour dates are at the bottom of the post. 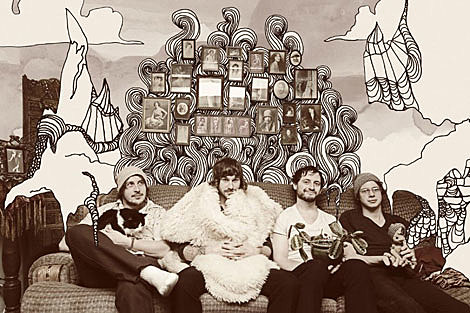 Also in town this week are Portland-via-Alaska quartet Portugal. The Man who have an annoying period in the middle of their name and are a little more hippie-friendly than most of the stuff I write about in this column. But I do like their new album, The Satanic Satanist, which focuses more on solid pop songs than psychedelic freakouts. I would call them more groovy than soulful, but it works, and there more memorable songs on the album than you usually get these days. Tomorrow's show (8/5) at Mercury Lounge is sold out but they play tonight at Union Pool (8/4) and there should still be tickets at the door. If you miss both of those, they will be back in October with a show at Maxwell's (10/16, tickets) and one at Bowery Ballroom (10/23, CMJ). All dates below.

This column to be continued with more going on this week. Tour dates from the above-mentioned bands, below...