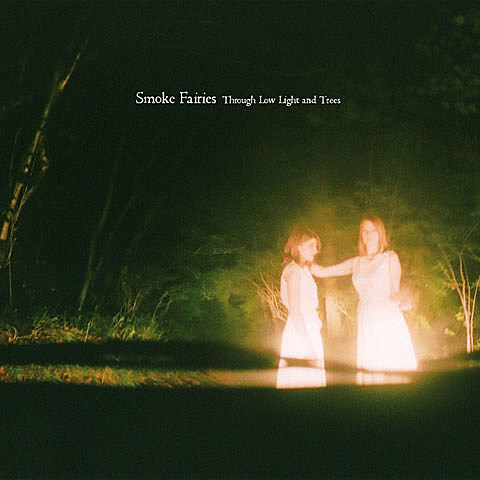 British folk duo Smoke Fairies release their first full-length album in the US, Through Low Light and Trees, today, June 14. The album, released in the UK September 6, 2010 via V2/Cooperative Music, was produced by Head who is known for working with PJ Harvey and Black Francis. The new US version of the CD also comes with a disc of bonus tracks. Check out the video for "Strange Moon Rising" and more of their music below.

You may remember Smoke Fairies from their "Gastown/Riversong" 7" which came out all the way back in December 2009 on Jack White's Third Man label. He also produced the single and contributed drums and guitar along with Jack Lawrence. The duo more recently reminded the US of their existence when they released a double a-side single "Hotel Room/Strange Moon Rising" for Record Store Day through 453 Records

Smoke Fairies are heading out on a US tour in late July with Rasputina. The tour doesn't include any NYC dates but the duo do have two NYC dates scheduled as part of a short trip here this month. After visiting Toronto for NXNE and then Boston, they play Rockwood Music Hall on June 21. They play the Manhattan venue right before Lisa Hannigan plays a sold out show on the same stage (no advanced tickets for the Smoke Fairies set though). They also open for My Gold Mask the next night, June 22 at The Rock Shop. Tickets are on sale for the Brooklyn show

Rasputina play their own NYC-area show with The Wilderness of Manitoba at Mexicali Blues in Teaneck, NJ on July 17. Tickets are still available.

Smoke Fairies contributed to MOJO Magazine's 'Harvest Revisited', a tribute to Neil Young's Harvest. Villagers, Phosphorescent, Sam Amidon and others appear on the compilation. Check out Smoke Fairies' take on "Alabama" below with more dates, videos, and other stuff.

Smoke Fairies - "Devil In My Mind" presented by 'In My Head, She Said'