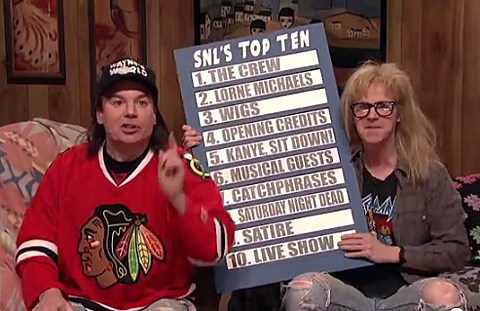 The Saturday Night Live 40th Anniversary was a spectacle, bringing together most of the show's famous cast, guest hosts, and favorite musical guests for a three-and-a-half hour extravaganza (with commercials, and not counting the extra hour of red carpet interviews that started an hour earlier on NBC). On the musical front, Kanye West got a lot of air time, performing "Jesus Walks" (while on his back), then getting up for "Only One" and new song "Wolves" (complete with ice-blue contact lenses) with Sia in a white wig, and Vic Mensa. Class skits were revisited, and Kanye was the target of some jokes in the new "Wayne's World" segment where "Kanye, Sit Down" came in at #5 on their Top 10 List.

Sia's wig would later appear on Zach Galifianakis when he introduced new Digital Short, "That's When You Break," that starred Andy Samberg and Adam Sandler (and clips of SNL actors cracking up ["breaking"] on camera). There was also Paul McCartney, who played Irving Plaza the night before, performing "I've Just Seen a Face" with Paul Simon and then "Maybe I'm Amazed." (He was very memorably, hilariously introduced by Keith Richards.) Later in the show Simon, introduced by Jack White, would come back out for "Still Crazy After All These Years" Related: Miley Cyrus covered Simon's "50 Ways to Leave Your Lover" (with Fred Armisen on invaluable tambourine, and Paul McCartney's drummer Abe Laboriel, Jr. playing as part of her band too). Miley was introduced by Win Butler and frequent guest-host Candice Bergen.

Best buds Justin Timberlake and Jimmy Fallon opened the show with a pretty impressive Beasties-style rap that chronicled the history of SNL. Later in the show Martin Short and Maya Rudolph (as Beyoncé) did a tribute to the many comedy musical sketches over the years many of whom made their return: Bill Murray's lounge singer (still great), Joe Piscopo as Frank Sinatra, Marty & Bobbi Culp (Will Ferrell & Ana Gasteyer), and The Blues Brothers (Dan Aykroyd was wearing his Crystal Skull vodka knit hat on the red carpet).

The SNL band got a big shout-out too, which saw the return of longtime guitarist G.E. Smith. Late bassist Tom "T-Bone" Wolk, who Smith played with on SNL and in Hall & Oates' band and died in 2010, was acknowledged in the "In Memoriam" segment that, hilariously, also included Jon Lovitz (who, not dead, was in the audience waving incredulously both times he was referred to as dead during the show). There was also a tribute to Tracy Morgan who is still recovering from a near-fatal car crash. 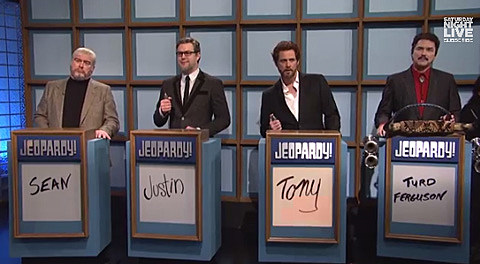 We got a lot of updates of classic sketches including the welcome return of "Celebrity Jeopardy," the maybe less welcome "The Californians" (with original cast member Laraine Newman, Taylor Swift> and a game Bradley Cooper who got to make out with Betty White), and Ackroyd did his famous "Bass-O-Matic" sketch again.

What else: Tina Fey and Amy Pohler did Weekend Update with Jane Curtain (and Edward Norton as Stefon and Melissa McCarthy as Chris Farley character Matt Foley); Jerry Seinfeld fielded questions from audience members Michael Douglas, John Goodman, James Franco, Larry David, Tim Meadows, Dakota Johnson and Sarah Palin; and Chris Rock paid tribute to Eddie Murphy who came out on the SNL stage for the first time in 30 years. That may have been one of the most awkward moments of the night. Everyone was hoping Eddie, who also talked to Al Roker on the red carpet in the pre-show, would perform, but that unfortunately didn't happen.

There was lots more: Steve Martin, Alec Baldwin, a sports montage, a shorts montage.... You can watch the whole thing over at NBC.com. More pictures and clips of many of the highlights, below...

Wayne and Garth list their Top Ten Things About SNL