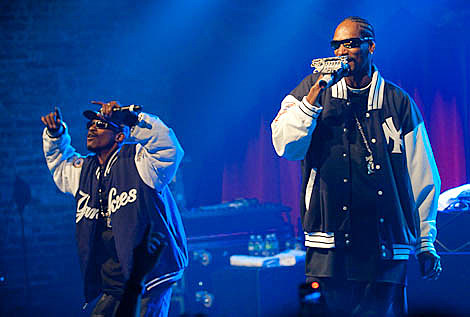 it was expected that during a weekend of music and festivities that Nate Dogg's legacy would be highlighted at some of the events of this past weekend's SXSW music festival in Austin.

Snoop Dogg, Warren G, Daz Dillinger and Kurupt all took the stage at Venue 222 during the "Respect The West" showcase and properly memorialized their fallen friend this past Saturday (March 19). MTV News captured some of the celebratory tribute on video which was a huge contrast to the somber tweets and condolences from those who knew Nate Dogg well.

Snoop Dogg and the rest of the D.P.G.C. seemed to put all of their energy into their performances, including a touching moment of silence - capped with Snoop inhaling a certain substance during the pause to show his respects.

Although the show was festive, Warren G admitted to MTV News that while he and his west coast brethren gave their best that the crew deeply misses their long-time colleague. "It means a lot, you know, because this is something that's being done for a person that we really love. It's deeper than music, that's a brother to us, to me and Kurupt and Snoop and Daz ... it's really deeper than that." -[MTV News]

Venue 222 was also known as "VIBE House" for the week, and you can watch videos from the tribute-filled final night below.

What other Nate Dogg tributes did you catch at SXSW? !!! did a cover at our Saturday BrooklynVegan Day Party at Barbarella (more info on that coming in a review of the whole show).

In other Snoop Dogg news, his previously announced March 26th show at Wellmont Theater has been pushed back to April 28th. All purchased tickets will be honored, and tickets are still available.