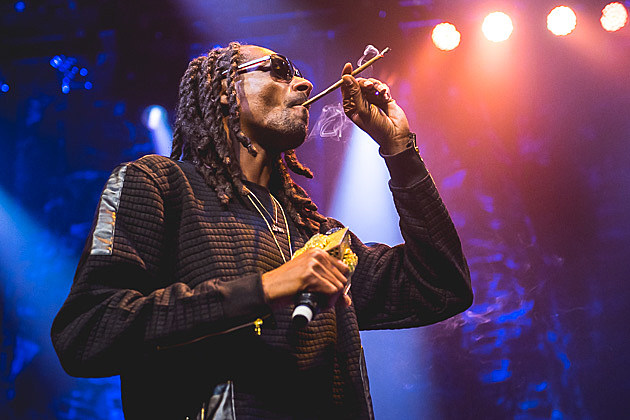 In news that for some reason has only just occurred, Snoop Dogg now has his own brand of weed. Said weed is called "Leafs by Snoop," and it is available now in stores in Colorado. Since Snoop isn't a Colorado resident, he can't legally own the company, but he was involved in the planning and creation of the brand nonetheless and has been touting it online and in person at a recent launch party for Leafs by Snoop in Denver. The brand by the self proclaimed "master of marijuana" is also making weed chocolate bars as well "Dogg Treat Fruit Drops" and "Dogg Treat Peanut Butter Gems."

This is only the newest cannabis-related venture for the Doggfather, who also owns a line of vape pens and a line of weed packaging called "FunkSac" has a VC fund for investment in weed, and has invested in the new "Uber for weed" app Eaze. The man is nothing if not opportunistic.

One would imagine that Snoop collaborator Willie Nelson is less than pleased with Snoop's new business endeavors, as he's been waging a very public fight against "big weed" in the wake of legalization. For those of us hoping for more music from the two of them, maybe they can "hash out" their differences over some Dogg treats.

In addition to his entrepreneurial activities, Snoop has been playing shows. Recently, he stopped by ACL Live in Austin with comedian Dave Hill.

Check out some videos Snoop has posted about Leafs by Snoop and listen to that Willie/Snoop jam below...