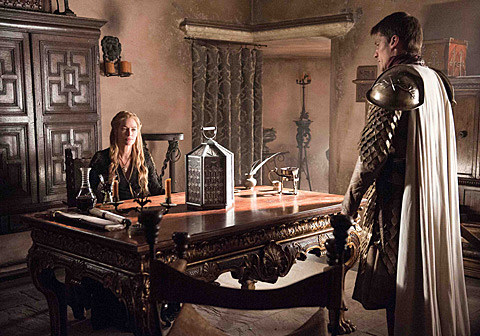 There will be a second official Game of Thrones mixtape coming in March and featuring Method Man, Snoop Dogg, Yandel and other hip hop artists. Catch the Throne: The Mixtape Vol. 2 will incorporate score and dialogue samples from last year's fourth season. Says Snoop:

Off the top, I love Game of Thrones - I even gave my expert analysis of this season on my GGN show. It's like the rap game, it's gangster, about family, loyalty and trying to get to the top. I had to get involved. Give the fans a little b it of how I see it.

Changing things up for this second go-round, metal bands Anthrax and Killswitch Engage will be involved in this one too. Says Anthrax's Scott Ian:

As fans of Game of Thrones, we are extremely excited to collaborate on this project. Recording a song about the Lannister family allows us to connect more with our fans and Game of Thrones fans in a way we would have never imagined.

Maybe this takes the sting off losing a Metal Grammy to Tenacious D, just a little.

Catch the Throne: The Mixtape Vol. 2 is, of course, part of the hype leadup to Game of Thrones' fifth season which premieres on HBO on April 12. HBO recently aired a half-hour GoT special, Game of Thrones Season 5: A Day in the Life, which follows the show's production units filming in three different countries on the same day. You can watch that, along with the Season 5 trailer, below...