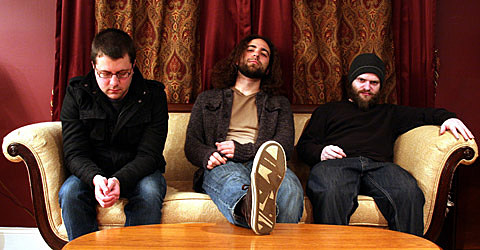 Its easy to see why members of East of The Wall and So Is The Tongue would get along; both bands clearly have similar record collections and traffic in technical rock with touches of metal, hardcore, psychedeila, and jazz. But more importantly, both bands understand that might does not mean right; So Is The Tongue never succumb to the trappings of overt-technicality at the expense of good songwriting.

Members of East of The Wall, So Is The Tongue and El Drugstore helm the imprint Nefarious Industries, who will release the sophomore So Is The Tongue LP on January 17th. Stream all of said LP, A Child Of Divorce, below. The record was produced by Colin Marston (of Krallice, Gorguts, Dysrhythmia, etc, the latter of which recently announced signing to Profound Lore) and is available now at the band's store.

NYCers can catch So Is The Tongue at their record release celebration at Lit Lounge on Monday (1/16) with Iceland's Lazyblood and So Hideous, My Love.

All tour dates and that stream is below.

--
So Is The Tongue - A Child of Divorce by brooklynvegan