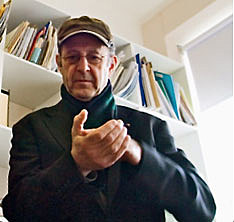 So Percussion, who played with Dan Deacon at the Brooklyn Masonic Temple in December, was to premiere a new Deacon piece, but that debut has been postponed. Instead, Jason Treuting from So Percussion, writes...

we are playing some new music that we've been working on as meditations on the concept of city. the music has been focusing on the task oriented nature of a city and the parallel task-oriented nature of playing music. loops are made out of tasks and we have taken to transforming mundane objects into musical instruments like we haven't before. turning on lamps, writing on paper, pouring gravel, putting down ordinary objects in rhythm, etc. a few new videos by my sister jenise treuting will be busted out as well.

The other ensemble on that bill, Signal, has several other gigs coming up. They're performing Michael Gordon's Trance, for a second time, at the Bang on a Can Marathon on May 31st.

Signal just did the music of Philip Glass at (Le) Poisson Rouge on May 17th. They'll return to the venue on Friday, June 22nd for a concert and party to celebrate Steve Reich's 2009 Pulitzer Prize for Music for Double Sextet. Reich's original Sextet (1984) will be performed at that show, presented by Wordless Music, as well. Tickets are on sale.

That gig is your only way to check out the piece (except for streaming excerpts), as there's currently no way to buy a recording of it. Reich discussed this in a recent interview...

Newsweek: I missed the premiere of "Double Sextet" last year, and when I heard it had won, I found myself upset that there was no way to buy the piece yet.

Reich: Yeah, that's just part of the recording business. When you have a 24-minute piece, the official recording hinges on finishing and recording two other pieces to go with it [on a CD]. I'm working on two other pieces right now, and have to finish writing the second one, actually. I've got a piece for all rock-and-roll people already completed, and it's going to premiere later this year. [Nico Muhly's blog]

Commenters on Nico Muhly's post about the situation rightly point out that Double Sextet should be released ASAP to capitalize on the Pulitzer publicity. The 2008 Pulitzer Prize for Music, won by Bang on a Can cofounder David Lang for his the little match girl passion (streaming here), is just seeing a CD release, with four other Lang works, on June 9th via Harmonia Mundi.

Speaking of Reich and Bang on a Can, the composer will perform his own "Clapping Music" at the Bang on a Can Big Benefit Bash taking place Wednesday, June 3rd at (Le) Poisson Rouge. Other special guests include Meredith Monk, David Cossin, Wu Man, Maya Beiser, Talujon and Doug Aitken. Tickets will run you a $400 donation to the non-profit...

...which is why the regular-people-friendly festival is hosting a "Bang on a Can't Afford the Other Benefit" show at LPR later that same night (6/3) with So Percussion, Gutbucket, Newspeak and NOW Ensemble. Tickets for that are a more reasonable $20.

Speaking of new ensembles, Bang on a Can is forming a new street band called Asphalt Orchestra. That group will make its debut later this summer at Lincoln Center Out of Doors Festival.

Full info on BoaC's Asphalt Orchestra, and its Lincoln Center Out of Doors Festival plans, below...