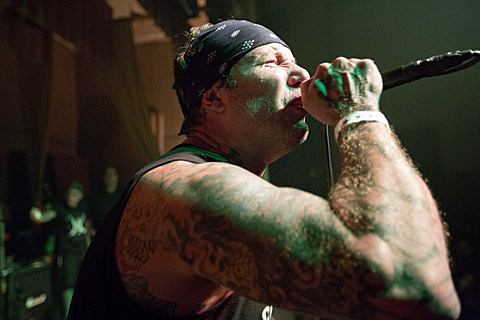 We were just talking about Brooklyn's The So So Glos, who released their pop punk-y new album, Blowout, performed on Letterman, and are currently on tour with Titus Andronicus. That tour doesn't hit NYC (Titus plays a free NYC show in August though), but we said it probably wouldn't be long before The So So Glos announce their own NYC show. Well, they've just announced one and it happens right after that tour on May 26 at Knitting Factory with Heaven's Gate, Dinowalrus, and Trabajo. Tickets for that show go on sale Friday (5/10) at 10 AM.

The So So Glos are also set to play a Northside show in the back room of Public Assembly on June 14 (only the front room will be closed) with Shapes and Le Rug. Tickets for that show are on sale now and Northside badges will also be accepted. Updated dates are listed below.

The Knitting Factory recently announced some other cool punk shows happening there soon too. Oregon Americana punks Larry and His Flask, who we wrote about when they released their Hobo's Lament EP and toured with Frank Turner, are releasing a new full length, By The Lamplight, on June 25 via Cascadian Records in the US and Frank Turner's Xtra Mile Records internationally. They'll support that album with a tour that ends on July 28 at Knitting Factory. Tickets for that show are on sale now. All dates are listed below.

Their pal Frank Turner meanwhile, will be on his own tour that hits NYC for two sold out MHOW shows in July. He just released a new video from his new album, Tape Deck Heart, which you can watch below.

As mentioned, Avail frontman Tim Barry will hit Knitting Factory on July 20 with Cory Branan and Des Ark. Tickets for that show are still available.

Other upcoming punk shows at Knitting Factory include power pop punks Cheap Girls (whose tour includes other NYC-area shows too) on May 17 (tickets) and post-hardcore rippers Coliseum on May 21 with the Dischord-signed Red Hare (mems. Bluetip, Dag Nasty, Swiz, Garden Variety, and more) (tickets).

All So So Glos and Larry and His Flask dates are listed, along with some videos, below...

Larry and His Flask in Europe

Roger Miret and the Disasters - "Give Em the Boot"

Frank Turner - "The Way I Tend To Be" Official Video