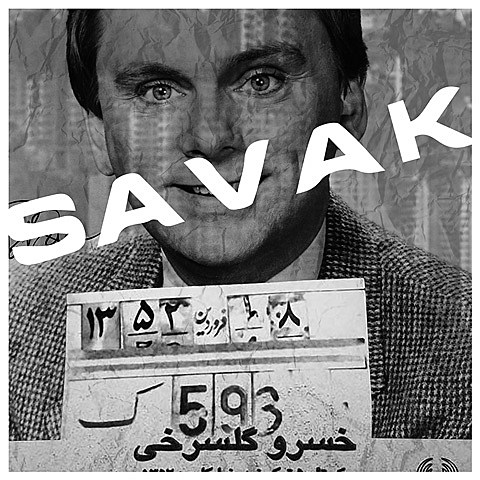 It was sad news when Obits called it quits in April, but on the good news front: guitarist Sohrab Habibion and bassist Greg Simpson will continue to play together in new band SAVAK. What's it all about? Sohrab fills us in:

Greg and I started writing songs with Michael Jaworski (The Cops, Virgin Islands) a few months before Obits flashed the lights and announced last call. Compared with The Obits, SAVAK is slightly more Mutant Pop 78/79 and slightly less Nuggets/Pebbles. We're covering a tune off The Stranglers first album, which gives a reasonable clue of our sound, but there's also elements of Spaghetti Western soundtracks, Zamrock riffage and the entrails of the Wailing Ultimate comp, so it's fun to see how it all shakes out.

You can get your very first taste of SAVAK with "This Currency Exchanged" which makes its premiere in this post. It's a slow build, tension-cranker that's not unlike what Wire were doing circa Chairs Missing. (It's also a little more like Sohrab's '90s band, Edsel.) Stream it below.

SAVAK will be making their live debut at Cake Shop on May 30 with Pittsburgh's awesome The Gotobeds (who recently signed to Sub Pop). That's one of the venue's "super shows" to celebrate its 10th anniversary. About the rest of SAVAK's live lineup, Sohrab adds, "we're going to split our set between the two drummers we play with, Matt Schulz (Enon, Holy Fuck) and Benjamin Van Dyke (Silent Majority, Will Oldham)." Rest of that Cake Shop bill is still TBA but it's $10 at the door.