Solange at Bowery Ballroom in 2012 (more by Amanda Hatfield) 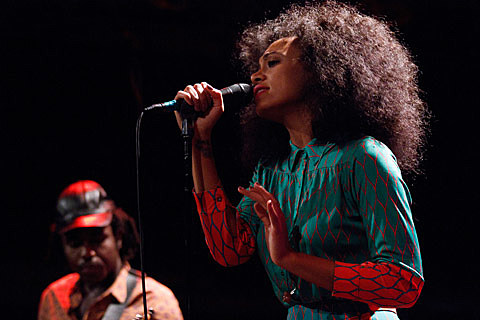 As mentioned, Solange, who is on the cover of the next FADER, will be going on a tour this year which comes to NYC for two shows at Webster Hall, both of which are sold out. The Webster Hall shows happen on February 20 and February 25 (not 2/20 and 2/18, as initially announced).

Since we last spoke, Solange's tour has been expanded and now includes international club dates and festivals stretching into August, including The Roots Picnic in Philly, Sweetlife in Maryland, Sasquatch! in Washington State, and Primavera Sound in Barcelona. It also includes another appearance in NYC at the 2013 Armory Party at MoMA on March 6, the same part that Neon Indian played last year. The Armory Show, founded in 1994, is the "largest art fair in New York" and will return to Piers 92 and 94 this year from March 7-10. Tickets to the preview party which Solange is playing, and which benefits the Armory Show, are on sale now, starting at $150.

Solange also just teamed up with collaborator Dev Hynes to perform an acoustic version of "Bad Girls" from Solange's album, True, for a Black Cab Session. That video and an updated list of Solange dates are below...