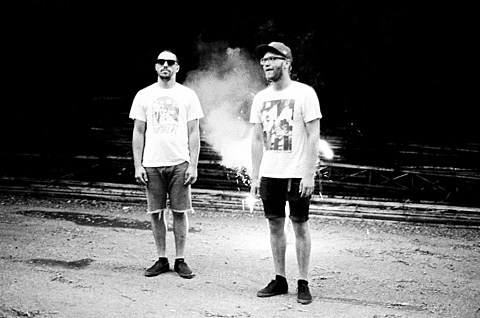 Mathy post-hardcore unit Native recently wrapped up a tour with O'Brother and Daylight, but it won't be long before they head out on the road again. Later this fall, they'll be doing a run of dates with Montreal noise rockers Solids that brings the two bands to NYC on November 13 at Saint Vitus. Tickets for that show are on sale now. All dates are listed below.

Solids will release their debut full length, Blame Confusion, next week (10/8), which follows a couple 7-inches. The LP puts them in the long line of Canadian loud rock bands that have been breaking out as of late; Japandroids are probably the most appropriate point of reference here (not just because they're also a guitar/drum duo), but also METZ, Fucked Up, Big Dick, and countless others. Like those bands, Solids like to rage, almost always playing in double time and piling on the distortion whenever they can... but underneath all the noise they can't help but not-so-subtly hide catchy power pop melodies. You can stream their whole record (via Exclaim) below.

Native's newest album, Orthodox, can also be streamed, along with those tour dates, below...