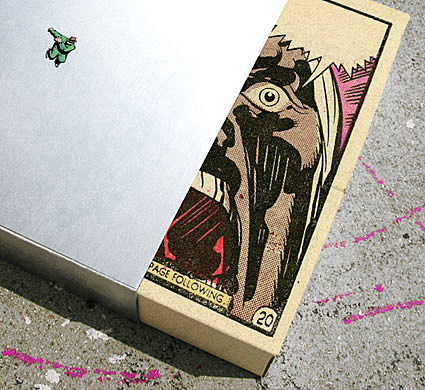 Fans of rapper-mysterio MF DOOM (those still around after his show-skipping antics this past year) can look forward to the follow up to 2004's MM...FOOD next month. DJ blog Spyder's Random Things recently posted an (apparently legit) one-sheet announcing that the new DOOM (sans MF) record, Born Into This, will hit October 21 on Lex Records. Though there's no mention of the new record on Lex's site, it's not really a surprise that word of the reclusive MC's new album would come via blog leak (though I'd watch for a sudden head cold to push the date back). The one-sheet states that the record will feature "superstar guests including production from J Dilla, Dangermouse and guests MC's Ghostface and Raekwon."

DOOM was conspicuously absent from Stones Throw's new Madvillainy 2: The Box, a Madlib-led remix album of 2004's Madvillainy, shipping as a limited-edition box set this Monday, September 15. The album, now available in digital form, recycles the original's vocal tracks under new Madlib production and will be packaged with:

CD Madvillainy "2" The Madlib Remix. 25 tracks.
7-INCH "One Beer (Drunk Version)" Madlib's original 2004 version, lost until recently on the floor of his Bomb Shelter studio. If you saw the studio you'd understand.
CASSETTE The Madvillainy Demo Tape. 12 tracks, 36 minutes. This is the first and only official release of the infamous Madvillain demo that "leaked into cyberspace," while the album was still in progress, as DOOM alludes to in the lyrics of "Rhinestone Cowboy."
T-SHIRT Nominated. Best Rolled L's. Madvillain shirt.
COMIC BOOK Meanwhile... the continuation of the All Caps video, included with the CD.
THE BOX 12x13x3 inches.

Stones Throw is also releasing a two of Madlib's latests, WLIB AM: King of the Wigflip and Beat Konducta Vol. 5: Dil Cosby Suite, on September 29 and October 28.

A pair of DOOM clasics, Operation: Doomsday and KMD's Black Bastards, will be reissued October 7 on Metal Face Records.