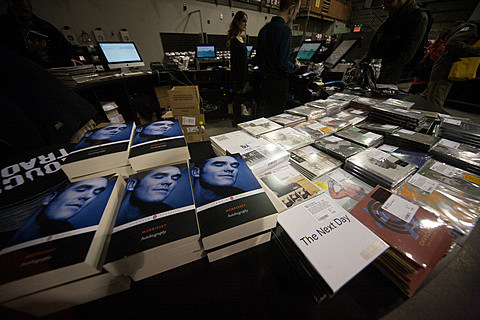 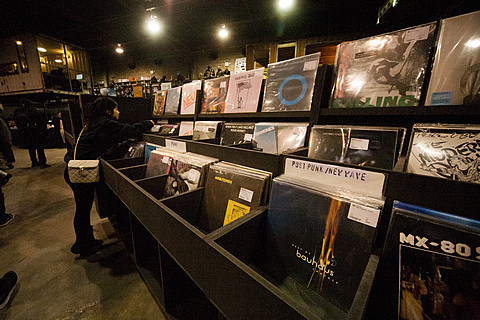 As you may have maybe -- just maybe -- heard, UK indie record store Rough Trade opened its first-ever NYC branch yesterday (11/25). As a record lover and Williamsburg resident, I headed over to N. 9th after work last night to check it out.

The store is big and warehouse-y with plenty of space in between shelves for easy browsing, and a centralized checkout area. (It is still small compared to the late-'90s days of Virgin Megastore and Tower.) There is a mezzanine with magazines and books (like import copies of Morrissey's Autobiography) on one side of the space, and on the other there is the Guardian Green Room which is a "multi-purpose digital lounge" and an exhibition space that currently has a recreation of Donald Glover's bedroom in Community. Main Drag music has a little vestibule with cool analogue synths, and a cafe run by Five Leaves will be open soon. 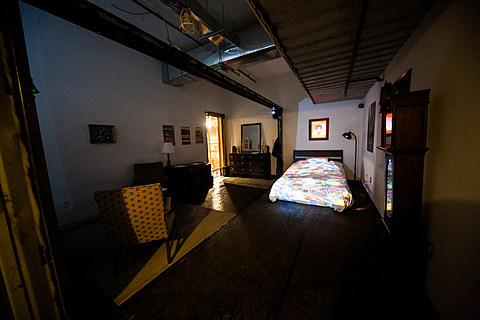 The store seems more in "must open" mode than "ready to open," as the record shelves are a little sparse right now. Prices for records are on the high side -- I saw very few less than $18 -- and they don't put records "on sale." But many of their featured items do come with "Rough Trade Exclusives," usually bonus discs which do add value. There are also no used records, which seems an odd choice to me given the way all other record stores in the area operate. Though in that way they're not so much treading on other's turf? They are, however, promising to stock imports, including the entirety of their 101 Albums of 2013... but that has not happened yet. (I was ready to buy the new Suede album, too.) I did buy the Morrissey book, which at $14.99 for an import seemed a bargain. Give it a month, and we'll hopefully see what the store is like.

I showed up too late for Sky Ferreira's live set, but there was a long line of people waiting to get their records/CDs signed. I watched a little bit from the mezzanine, as bf and DIIV frontman Cole Smith showed up to say hi. One fan asked if he would sign Sky's album too. He obliged, writing a note right on the most, uh, exposed area of the LP cover. Pretty funny.

I did, however, stick around to watch Charles Bradley. The performance space at Rough Trade is really nice. Official capacity is 250 but, with a seated balcony it felt bigger than that. There were ping pong tables in the back part of the balcony last night, that I'm told won't be there during ticketed shows (but will be available during the day). Lighting was good and the sound was better. Bradley has a pretty crack band who make any room sound good but I was really impressed with the acoustics. There are lots of small rooms in Williamsburg already, but this is a nice addition to the area.

Charles Bradley sounded fantastic. His years as a James Brown tribute artist have bestowed him with killer stage moves, and the dude just oozes charisma and soul. It was a real treat to see him in such a small room and the whole crowd was grinning the whole time. NYC will have two more chances to see Bradley in January.

Today (11/26) you can catch a free show from Danny Brown which happens at 5 PM. You do need to grab a wristband first which are available at the counter. Wednesday night (11/27, 7 PM) is a free in-store with Matthew E. White. Two shows from NYC legends Television will be Rough Trade's first ticketed shows (both are sold out).

In addition to having his bedroom there, Donald Glover will perform as Childish Gambino at Rough Trade on December 6. You need to buy a copy of his new album Because of the Internet. There will be a record signing following the performance.

Did you check out Rough Trade on opening day? What did you think? Buy anything?