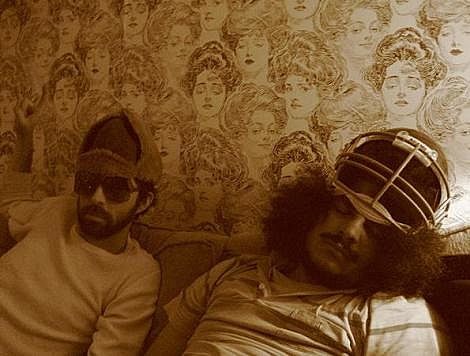 Along for the ride at the Bell House is the duo of Roberto C Lange (collaborator and member of Herren's Savath Y Savalas project) and David Ellis (MoMa featured visual artist), Alexis O'Hara, GOD, Grade 13, Nine 11 Thesaurus, and Tiny Toones. The Bell House show will serve as a launch party for Radio23.org, a streaming audio site that will broadcast the whole thing LIVE. Tickets are still available. We also have two pairs of tickets to give away. Details below.

The second show lined up for Scott Herren will take place at MoMa on May 4th as part of their ongoing MoMA Monday Nights series. Tickets are $10 if you ride your bike to the museum that night or if you are a Flavorpill subscriber. Otherwise it costs $20.

The third, and possibly the biggest, is the NY installation of Barcelona's Sonar festival on May 12th in NYC:

Sonar is organising a day of special concerts and performances in New York in a very unusual venue in the city, the Baryshnikov Arts Center (BAC), with a top class line-up that combines multimedia art ideas with experimental electronica and latest generation pop, and which includes... [installations by] both Catalan and American artists... [including] Marcel·lí Antúnez and ReacTable featuring Ikue Mori; the mysterious ambient of Balago; the soundtrack, performed live, by Árbol and Fibla for a film by Taiwan's Tsai Ming-Liang; the extravagant pop of Hidrogenesse; hip-hop in a trio format with the Del Palo Soundsystem; two sets by the Barcelona dj d.a.r.y.l.; the highly unconventional rhythm of the Americans (both ex-residents of Barcelona) DJ/Rupture and Prefuse 73; and visuals by No-Domain.

Free tickets are required, and the jump-off takes place at 8PM to 1AM in the Baryshnikov Arts Center NYC (450 West 37th Street, Suite 501).

You may have recently caught Prefuse 73 spinning some records at Other Music during Record Store Day.

Some videos, and contest details, below...

if you want a pair of tickets to Prefuse 73 at The Bell House, email BVCONTESTS@HOTMAIL.COM (subject: Prefuse). Include your first and last name. Winner will be picked at random and contacted ASAP.