The Sonar compound during Maryland Deathfest 2012 (more by BBG) 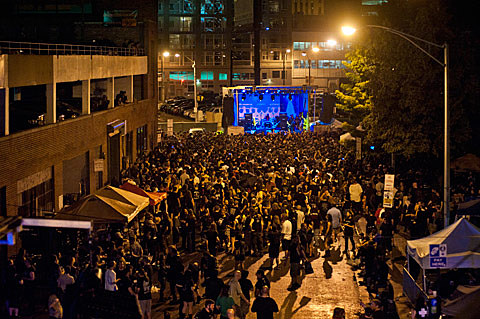 Greetings, everyone. In case the rumor hasn't made it to your ears, we can let you know that Sonar (the home of MDF since 2006) is closing. Why? That's not important.

What is important is that we've known about this situation for months, and we were already searching for a new location only a few days after MDF X ended. Currently, we have THREE locations to choose from, all of which would be in Baltimore. Once some more logistical and financial planning takes place, we can make a decision on next year's location. With a little luck, we'll reveal that info before the end of July. Worst case scenario, we'll let you know sometime in August.

In the meantime, we will be announcing the first round of confirmed bands for MDF XI very soon, maybe even as early as next week.
[Maryland Deathfest]

I guess its not really that much of a shock that Sonar in Baltimore is closing their doors, considering the troubles they had recently (they closed and reopened in 2011). That said, I'm sad to see it go, especially after years of Maryland Deathfest (pictures from 2012 are HERE, HERE, HERE, HERE and HERE) at the venue and recently, the A389 Anniversary shows (2012 in pictures are HERE and HERE). Goodbye Sonar, but thanks for all of the amazing memories.