The Sonar compound during Maryland Deathfest 2012 (more by Fred Pessaro) 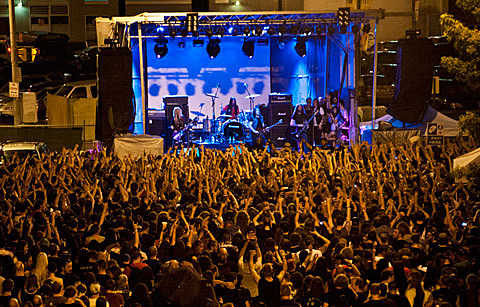 Baltimore club Sonar (a previous home of Maryland Deathfest) has been closed for almost two years now after owner Dan McIntosh was named in a federal indictment for participating in drug distribution. Now, Baltimore Sun reports that McIntosh will be facing 10 years in prison for the crime:

The owner of Baltimore's Sonar nightclub was sentenced Thursday to 10 years in prison for his role in supervising a drug dealing and money laundering operation, federal prosecutors announced.

Daniel Gerard McIntosh, 38, of Sparks, was part of a large drug operation busted by the Drug Enforcement Agency when it seized more than 80 pounds of marijuana and $30,000 in cash from the group's headquarters in the 3500 block of Hickory Ave., in Hampden. The agency also found 30 cell phones, documentation of a plane purchased for $450,000, books showing more than $14.5 million in marijuana sales, money counters and fake IDs in the sting.

That evidence was presented at a seven-week trial, during which prosecutors said McIntosh orchestrated and received large shipments of marijuana from California to distribute to local dealers in the Baltimore area since 2006.

Read more at the Baltimore Sun.