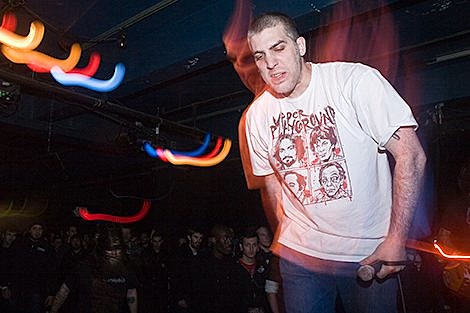 "Sonar has been reopened! We are working hard at getting our liquor license back in place, this should be resolved very quickly!

We will have announcements about ALL upcoming shows but most should be going on as planned with all tickets honored!

There were some shows that got canceled and refunds have not been offered, we will be giving refunds for these shows as soon as we can, please bear with us!" -[Sonar]

Though some shows have already been relocated, Maryland Deathfest is back on at Baltimore music venue Sonar which announced it was closing on May 4th. Dillinger Escape Plan/Deftones, Odd Future, and other shows are back on at the venue too. Head to the Sonar Facebook page for more details on what's been moved and what is staying put.

In related news, two bands I was looking forward to seeing at MDF 2011, Hatred Surge and Death Breath, have sadly both dropped off the fest. The former will also not be on board for a previously discussed tour with Miasmal/Innumerable Forms that hits Acheron on May 24th, but instead will be replaced by The Impalers, which contains members of Hatred Surge/Mammoth Grinder. Stream The Imaplers's demo and a forthcoming 7" below, it rips.

And don't forget that The Dillinger Escape Plan play Music Hall of Williamsburg on May 15th (tickets), a one off solo show for the band whose tour with the Deftones also bring them to Best Buy Theater for sold out shows on 5/13 and 5/14. The Psychic Paramount & Psychic Limb support at MHoW.

Odd Future play NYC at the sold-out Highline Ballroom on May 13th. Tyler the Creator's new album Goblin is out NOW via XL.

Stream those tracks by The Impalers, with updaed Miasmal dates, below...