more sax: Sondre in the studio (via) 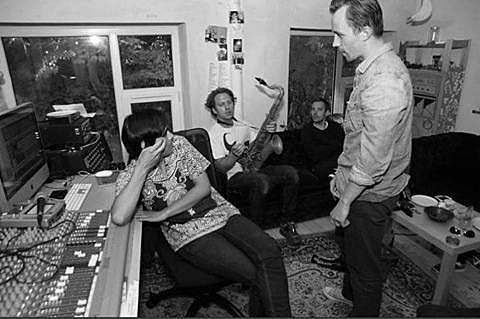 Sondre Lerche, who splits his time between Norway and Brooklyn these days, is busy working on his eighth record. Says the man:

It'll take some time, but I've been sporadically hard at work with a new album that I'm recording all over the place in collaboration with a bunch of talented friends and strangers. Here's a picture from a session at Skogen Studio i Bergen, where producer Matias Tellez (of Young Dreams fame) and I are discussing how we feel about the flowery shirt he's wearing. Other than that we pretty much finished three songs, that are now mix-ready so we're up and running and I've got loads more to record. Kjetil Møster (with saxophone) and Kim Åge Furuhaug contributed pure gold to a song called Logging Off that really took me by surprise. Something new is brewing. Picture by Birgit Sol for this month's Aftenposten K magazine, where there's a long article on Skogen and the other studios at Bergen Kjøtt.

Meanwhile, Sondre is on an upcoming Scott Walker tribute album, Songs From Montague Terrace, contributing a cover of b-side "The Plague." You can stream it below. The record also features contributions from Dax Riggs, Nightlands, Coves, Bright Light Bright Light, Eugene McGuinness and more. It was supposed to be out September 16 but has been pushed back. Stay tuned.

In other news, Sondre has a couple upcoming North American dates, including one in NYC during CMJ. He'll play Bowery Ballroom on October 15 as part of the Talkhouse showcase (over the summer Sondre reviewed Julia Holter for The Talkhouse) that also features TEEN, Wet, and Saint Rich. Tickets to that show go on AmEx presale today at noon and the general on-sale starts Friday (10/4) at noon. All dates are listed below.