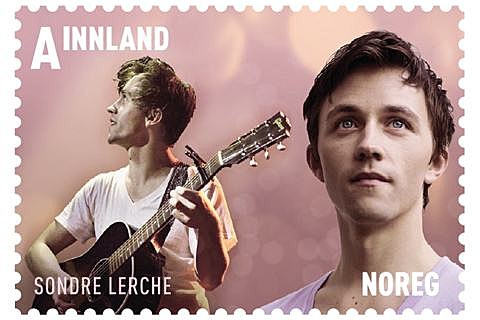 Sondre Lerche is still working on his new album, but he does have music coming out before that. He collaborated with fellow musician Kato Ådland on the score to Norwegian drama The Sleepwalker which is out January 14. It's mostly instrumental but Sondre sings on two tracks. You may remember that he also did the score/soundtrack for Dan in Real Life a few years ago. The Sleepwalker film will makes its U.S. debut at the 2014 Sundance Film Festival which happens Jan. 16 - 26 in Park City, Utah.

Sondre splits his time between Bergen, Norway and Brooklyn, and he's got some shows coming up in his North American hometown in a couple months at Rough Trade NYC on February 21 & 23. Hopefully their sound issues will be fixed by then. Tickets to those two shows go on sale Friday (12/13) at noon. They are his only announced North American shows at present.

More Lerche news. The singer's likeness is being used on an official Norwegian postage stamp. It's part of a series based on Norwegian Popular Music. You can see that at the top of this post. And lastly, Sondre revealed on Facebook that his favorite album of 2013 was My Bloody Valentine's mbv. He also made a "40 Songs from 2013" that, while no specific order was given, includes songs by Julia Holter, King Krule, The Pastels, Prefab Sprout, Arcade Fire, David Bowie and more. You can check it out below....