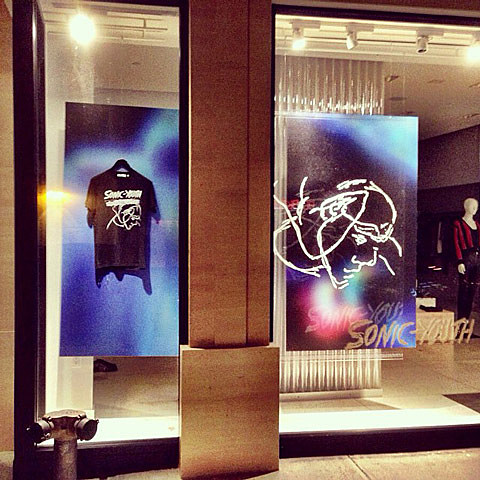 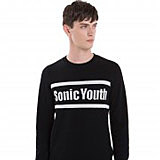 Walking out of last night's Merchandise show at Music Hall of Williamsburg, I did a double take seeing a store across the street with a Sonic Youth Confusion is Sex window display, one half with with the album's artwork on the window itself, the other half with a hanging t-shirt. The store is the Brooklyn branch of high-end Paris boutique Sandro and there's an entire SY collection available currently. The tee, which is made from 100% cotton and looks like something you used to be able to buy on Saint Marks for 10 bucks, goes for $95 and is actually one of the cheaper items. There's also a $340 "Day Dream" sweater, two different $110 knit ski caps and a bunch of other Sonic Youth album cover shirts ($95 - $130). N. 6th St sure is weird these days.

In other, more affordable and interesting, Sonic Youth-related news, Kim Gordon will play Issue Project Room on December 3. She's performing as a duo with guitarist Loren Connors, the first time they'll have done this. (Loren has played with Kim's ex too.) Gary War, who lives in New Zealand these days and hasn't released an album in a couple years, will open the show. Tickets to the show go on sale to IPR Members on Friday (10/17) and will be available to the general public starting October 24.

Meanwhile, Kim also has a couple Body/Head dates at Union Pool next month; and Lee Renaldo's art exhibition at One Mile Gallery in Kingston, NY is up through next week, and he'll play a collaborative set with Noveller at Lincoln Center next month. Thurston Moore and Steve Shelley will be in town next week with The Thurston Moore Band.