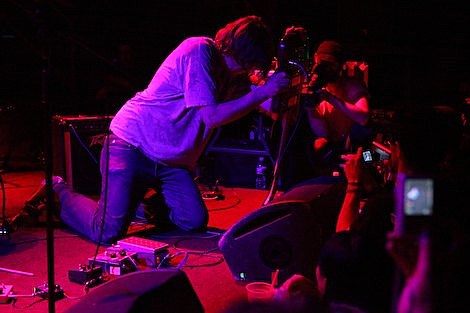 Maybe you caught Sonic Youth's noise set at No Fun Fest or have been streaming The Eternal through Matador's Buy Early Get Now program.

If both left you wanting more, you'll have your chance tonight (May 22nd)

First, Bill Nace, ie. the guy who wasn't Lee at NFF, will play the late set at The Stone tonight (10pm). Joining him will be Greg Kelley on trumpet and Jake Meginsky on percussion. Before that, the Stone's May curator, Grey Gersten, performs with tape-guy G. Lucas Crane and drummer Ryan Sawyer.

If you'd rather follow the The Eternal route (ie. you're sick of listening to the record in your home), Matador is hosting a listening party for the album tonight (5/22) at NYC's Envoy Gallery (131 Chrystie St.) It's free admission, capacity permitting, but RSVP is required. Flyer below.

After that party, there's also an invite-only after-party with LIVE music at Home Sweet Home, which will be closed to the public. Local bands will be playing Sonic Youth covers. Those local bands include The Antlers (who played Bowery Ballroom last night), Suckers (who have a lot of other shows coming up), Joan As Policewoman (who recently played with Iggy Pop), Tiny Masters of Today (who are playing Citysol this year), and The Homosexuals (who are now Bruno Wizard with Fiasco as his backing band according to someone that got to the Dan Deacon show last week early enough to see their unannounced set), AND "more are being confirmed" (for tonight's show). We have three pairs of tickets (guestlist spots) to give away for the afterparty. Info on how to win them, below...

SY played a free 4th of July show last summer in Battery Park (to be released as a bonus disc with some copies of the new record). That gig was within eyeshot of the Statue of Liberty and other iconic landmarks. This summer the band is playing a free show under St. Louis' famed Gateway Arch on July 17th as part of that city's Live on the Levee summer festival. It's just one of the many dates on Sonic Youth's summer North American tour, the openers for which were recently announced. 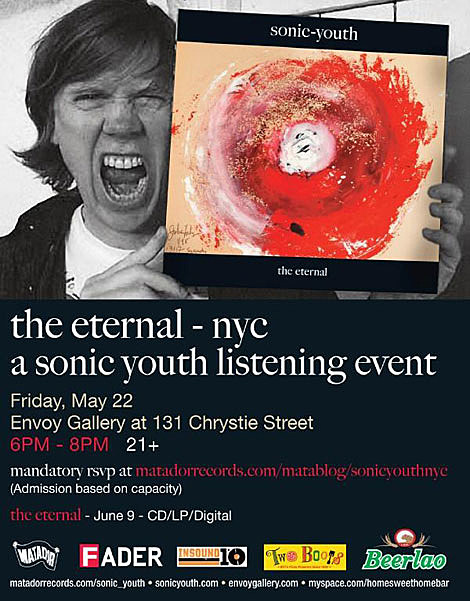 TWO WIN A PAIR OF SPOTS FOR THE AFTERPARTY: E-MAIL BVCONTESTS@HOTMAIL.COM (Subject: Eternal) with your first and last name. I assume it is 21+ to get in since Home Sweet Home is a bar. The winners will be picked at random and notified ASAP via email. Your name will be placed on the guestlist. Your email address will not be shared with anyone.