"So sorry to hear of Lou Reed s passing this is a huge shock!" - Kim Gordon

Sonic Youth at Battery Park in 2008 (more by Jason Bergman) 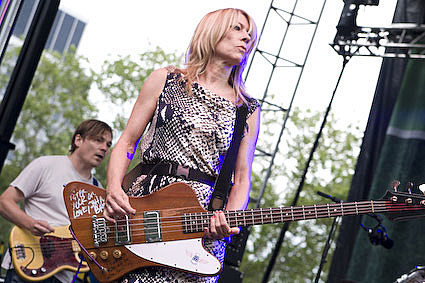 Of the many musicians that have commented on the unfortunate passing of Lou Reed, we haven't gotten one (yet?) from Sonic Youth, the legendary experimental New York band who owe much of their career to Lou's legendary experimental New York band. Though two of the members did tweet sentiments (above), and the band tweeted a link to a Dangerous Minds post featuring Sonic Youth "in the weirdest Lou Reed 'tribute' you'll ever see." The post features a short film from 1987 starring Sonic Youth called Lou Believers. As Ron Kretsch at Dangerous Minds puts it:

Kim Gordon also tweeted a response to Miley Cyrus' "noooooooooo notttttttttt LOU REED" tweet saying, "I could tell he's been a big inspiration to her." Though as MTV would have it, Miley is one of the "12 People You Love Who Loved Lou Reed."

In related news, Sonic Youth's Thurston Moore is playing The Stone on New Year's Eve with John Zorn, who also paid tribute to Lou. Thurston's band Chelsea Light Moving are also releasing a tour-only split cassette with their tourmates Merchandise. The cassette features a new song from each band, and Merchandise's is their first recording with new drummer Elser Nino. The tour begins this Tuesday (10/29), and all dates are listed below.

Elser Nino also drums in hardcore band Shoxx, who are about to play their last-ever show on November 8 at Fitness (1196 Myrtle Ave) with Gag, Goosebumps, Pleasure Industry, and Ivy.

Lee Ranaldo is also doing his guitar clinic at Other Music tonight (10/28). It starts at 8 PM.