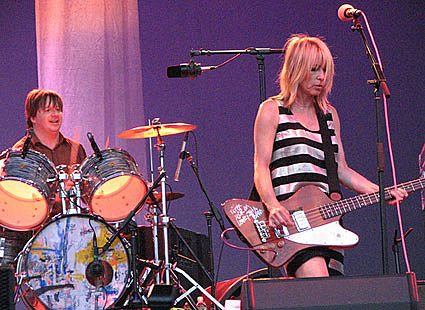 I saw Sonic Youth perform Daydream Nation in its entirety twice in the span of a couple weeks, and if you really want to know, the first time in Chicago was better. Specifically, it was better for me -- I'm not sure if I can actually compare the performances in any meaningful way because I was so much more emotionally involved the first time around, in part because I was alone in the middle of a crowd of people who responded with so much joy and passion that it couldn't help but be a more visceral experience. (In comparison, the Brooklyn audience was...well, a Brooklyn audience, i.e. "extremely psyched in their own way," as my friend very charitably put it.) [Fluxblog]

Most people walked away from this show with nice things to say - even people who sat and listened outside - most people, but not everyone........

As I write, Sonic Youth is performing at McCarren Pool. I’m not taping it, I’m not attending it. I’ve deleted my post from June promoting their album and providing a link where multiple nyctaper readers have already purchased copies of the new Daydream Nation CD. Sonic Youth can take their regurgitation of their 20-years-ago heyday and shove it up their ass.

I had an email which had been cc’d to Lee Ranaldo the guitarist. I was told to speak to Lee or soundman Aaron Mullan if there was any problem with entry. It was all supposed to be nice and simple. Only it wasn’t. The guard stopped me at the door, as well he should, and when I showed the email, he was nice enough to radio to security to get my clearance. Twenty-five minutes later, after multiple radio calls, I was told that neither Lee nor Aaron knew anything about taping and that the answer on taping was “no”.

Apologies to all the readers who have anxiously awaited my recording of this concert. When a band specifically allows taping in the past, grants specific permission in email, and ultimately leaves me standing at the gate denied entry, I’m left to consider whether its really worth expending any more time, money, and energy purchasing their product, buying tickets to their concerts, and promoting the performances through sharing my recordings. Given the way I was jerked around tonight, the answer with Sonic Youth is the same answer I received at the gate–”no”.

A band that could give a crap about their fans really shouldn’t get support from anyone. Don’t buy Sonic Youth CDs, don’t buy tickets to their concerts, and don’t give them any attention whatsoever. They’re tired old hacks anyway. 1988 is over. [nyctaper]