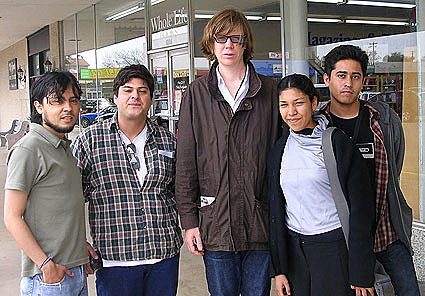 It's been announced elsewhere that Sonic Youth will be performing their classic album Daydream Nation in full at shows in Europe, Chicago (the Pitchfork Festival), and California. No NYC yet, but I can only assume they won't forget about us. Maybe these two rumored dates will be when we get our share:

In the meantime, New Yorkers can catch Sonic Youth members Thurston Moore, Kim Gordon, and Jim O'Rourke at the No Fun Fest in Brooklyn in May (don't expect anything like Sonic Youth though!).

And like Pagoda, Thurston is also involved with putting out the new Wooden Wand album:

The legendary musicians and tastemakers in Sonic Youth have professed their love for folkadelic troubadour Wooden Wand, taking him on tour as their opening act in February and lending their support in the making of his latest album, James & The Quiet.

There's an MP3 from James & The Quiet at the top of this post. Sonic Youth tour dates below....