Thurston at Pitchfork Fest in July (more by Dominick Mastrangelo) 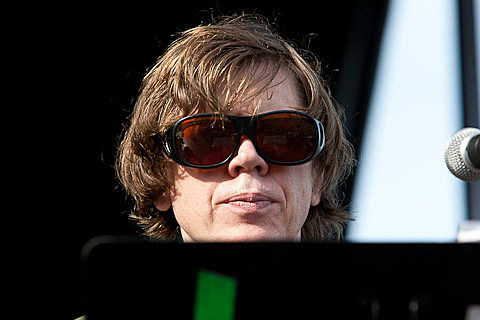 As mentioned, Thurston Moore is playing an acoustic set for Lincoln Center's American Songbook 2012 Season on February 2. Tickets for the show are on sale now.

Thurston has since scheduled a tour around the Lincoln Center show which hits Hoboken, NJ the next night at Maxwell's on February 3. Tickets for the NJ show go on sale Friday (11/18) at noon. He also plays New Hope Winery on February 4. All shows will be Thurston with his Demolished Thoughts ensemble (Keith Wood, Mary Lattimore, John Moloney, Samara Lubelski). All dates are listed below.

Meanwhile, you can catch Thurston's Sonic Youth bandmates Lee Ranaldo and Steve Shelley at the previously announced Glasslands show on 12/16 (tickets), where they'll be playing material off Lee's upcoming solo album Between The Times & The Tides, which comes out March 20 via Matador.

Sonic Youth, despite recent troubles, just played a show in San Paulo, Brazil on November 14th. Many on the Internet are asking if it could be their last show ever. We hope not. Regardless, you can watch video of the whole thing, along with all tour dates, below...