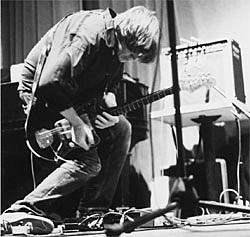 In the last few years, Moore has watched as contemporaries including Pixies and Dinosaur Jr. reunited to great acclaim and substantial financial rewards. And the 49-year-old admits he sometimes wonders how much money a Sonic Youth reunion tour would have made. He says, "The Pixies reunion was a real success, and Dinosaur Jr. seems like a big success, and both those bands play as good as they ever did. Mission Of Burma blew my mind when they came back. "But a band like us never did break up. Which was to our own detriment. "What would have happened if we did break up after (classic 1988 double album) Daydream Nation - or even after (1990's) Dirty - and had gotten back together two years ago? "You'd be interviewing me at the Chateau Marmont as I'm waiting for my limousine. We probably would have made so much money. "This was our biggest career faux-pas - not breaking up." [contactmusic]