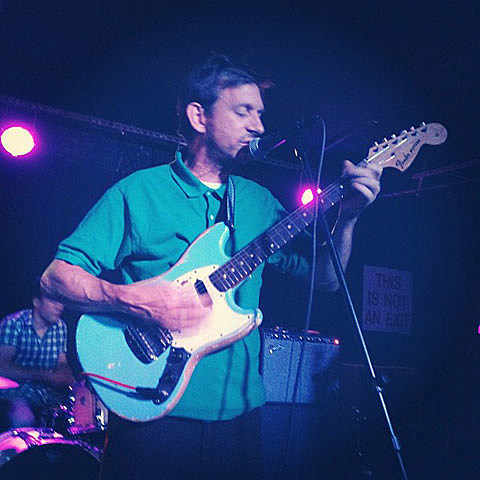 Sonny & the Sunsets, on tour in support of new album Longtime Companion, visited Mercury Lounge Thursday night. The band played Maxwell's the day before, and has one more NYC show--Saturday, August 18 at Glasslands with Magic Trick--before they leave town.

At Mercury Lounge, frontman Sonny Smith seemed to be in good spirits, despite the country-tinged new record focusing mainly on the breakup of his decade-long relationship (though maybe it's a Smoky Robinson "Tears of a Clown" type thing). Either way, Smith chatted throughout the set, quipping with his band and the audience. As a showman, Smith is energetic, engaging and pretty hilarious. He crawled into the crowd to sing a bunch of tunes and had one woman hold the mic while he yelped into it.

The setlist drew from a few of the prolific songwriter's projects, including a bunch from Tomorrow is Alright ("Death Cream" "Bad Vibes and Evil Thoughts" "Too Young to Burn" "Planet of Women") and Hit After Hit ("Heart of Sadness," "Reflections on Youth"). In addition to Longtime Companion, Smith recently re-released an album titled One Act Plays, which wouldn't surprise anyone in the crowd. On a few occasions, Sonny's lyrics seemed more like monologues than songs, as he riffed on alien-love and space travel. The touring band, a five-piece band, didn't include the pedal steel, which sounds so sweet on the new album, but still the solid band served as a good foil to Sonny's freewheeling act and expressive drawl.

Magic Trick, the psych-folk project of Fresh & Onlys singer Tim Cohen, opened. I only caught part of the set but did hear "Invisible at Midnight" off his excellent new LP Ruler of the Night. The band ditched the album's more experimental arrangements for a straight ahead approach, which forefronted Cohen's deadpan baritone and mystical lyrics (look for more of both on the new Fresh & Only's LP later this year).

Check out a video from the Mercury show below.