DOWNLOAD: Sonny Smith - Over the Border and Into the Night (MP3) 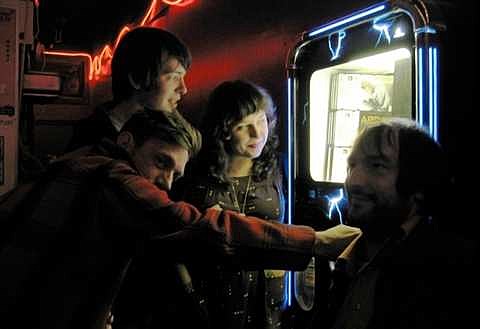 Sonny & the Sunsets have added another NYC area show to happen while they're here in in August. In addition to dates at Mercury Lounge (8/16) and Glasslands (8/18) the band will also play Maxwell's on August 15 and tickets for that show are on sale.

The songs on One Act Plays started out as real one act plays written for the theater. But in writing them I began to make them songs at some point. I can't remember when this mysterious shift happened. However, ultimately the plays as songs were performed on stage in a play called The Dangerous Stranger, so somehow it came full circle. The Dangerous Stranger was supposed to be about reality being the dangerous intruder of fantasy, and fantasy being a dangerous intruder to reality. I can't remember if the play was successful at conveying this idea at all. That was the kinda stuff on my mind at the time I guess. I had a few influences at the time I was writing them. One was Terry Allen's Juarez, a concept record with recurring characters. Also I was really into Sam Shepard at the same time so I was reading a lot of his stuff. A few of the songs, like 'Eddie and Rita' even have some stage directions lifted directly from one of his plays. The song 'Following Father' took a bunch of facts from my dad's cousin, a Texan who always had some get rich quick scheme that never lasted. I was trying to make some kind of Tennessee Williams like thing apparently. Epic! Large! Family! Redemption! Well, anyway, most of these plays are fictional, except for 'Freaks In Space' and 'Honey Roy Rockwell'. Those two are the complete truth. The terrible truth.

You can download "Over the Border and Into the Night" from the album at the top of this post. Only 400 copies of One Act Plays were pressed and you can order one here. Secret Seven will also release the second volume of their San Francisco artists In a Cloud series on July 17 which features previously unreleased cuts by Sonny & the Sunsets, Vetiver, Ty Segall, Hannah Lew (of Grass Widow), Kelley Stoltz, Tim Cohen, The Papercuts and more. It's only being released on vinyl but you can stream the whole compilation below.

And in more Sonny Smith news, they just released the third in his "100 Records" series in which he wrote and recorded 100 songs under the guise of 100 different fictional bands. Some of those, like "Year of the Cock" have ended up on actual Sunsets albums (in that case, his new one), others haven't. You can stream a few from Vol. 3 below and order the vinyl here.

All song streams and a list of updated dates below...