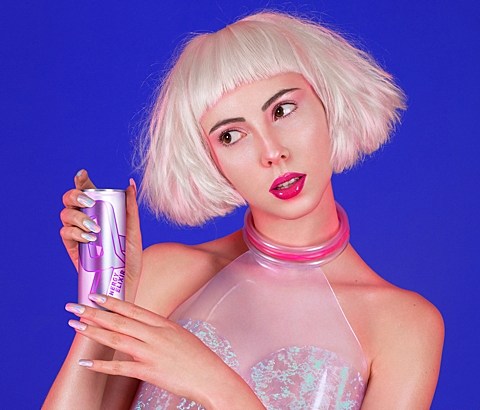 You already know UK producer SOPHIE from the very catchy "Bipp," or maybe from his newest single, "Lemonade" / "Hard" (streaming below). He's now announced a collaborative project with A.G. Cook (of the PC Music label) which they're calling QT, and they've signed to XL Recordings for their first single, "Hey QT." This one's a maximalist pop jam, as much an earworm as "Bipp" is. Check it out below.

UPDATE: Apparently there's some mystery as to who QT is. It may actually be the singer that Sophie and A.G. Cook produced this song for. Pitchfork says that's her pictured above, and that Sophie and Cook call her "a sparkling future pop sensation."

SOPHIE will be going on a short US tour this year, which brings him back to NYC for a previously discussed appearance at Warm Up at MoMA PS1 on September 6. It's the last show in this year's series, and one of the best lineups of the summer with Yeezus contributor Evian Christ, UK rave-fueled IDMer Lone, the psychedelic Forest Swords, and a special guest TBA. Tickets are still available.

All SOPHIE dates are listed, with those song streams, below...

* with Flume
@ with The Range
% curated by Numbers and Optimo
# with Evian Christ, Lone, Forest Swords
! with Panda Bear, Ejecta, Doss, Blues Control