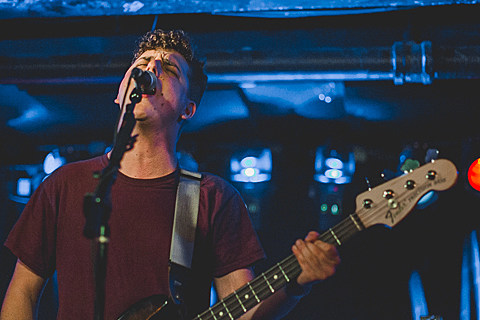 Somos and Sorority Noise both put out their debut albums this year, Temple of Plenty and Forgettable, respectively, and now they've teamed up for a split EP that's due out next week (11/4) via Bad Timing Records (pre-order). While Somos' debut was mostly punky indie rock, they've slowed down for their two contributions here, giving themselves space to experiment with new layers and more complexity. And while much of Sorority Noise's album was crunchy pop rock, the last three tracks had them moving in a more somber direction as well, which is what they continue here. A stream of the full EP premieres in this post and can be listened to below.

Both bands have interesting futures ahead of them too. Somos recently announced that they left Tiny Engines for their new label home of No Sleep and are planning to put out a new album for the label in 2015. Meanwhile, Sorority Noise recently mentioned that two of their members left the band but they'll be moving forward.

Both bands have shows coming too. Sorority Noise are playing The Fest but first will play the Topshelf CMJ showcase (presented by Washed Up Emo) happening Friday (10/24) at Cameo with The World Is A Beautiful Place, Empire! Empire!, Field Mouse and Wildhoney. That show is free with RSVP (no badges required). You can also catch TWIABP at the free BrooklynVegan Friday day party at Baby's All RIght, and Tom from Washed Up Emo DJs our official BV showcase.

Somos have a ton of dates, including the previously announced run with Modern Baseball, Foxing and Crying that hits NYC on December 12 at Gramercy Theater and December 15 at MHOW. Tickets for both of those shows are still available.

All Somos dates are listed, with the EP stream, below...