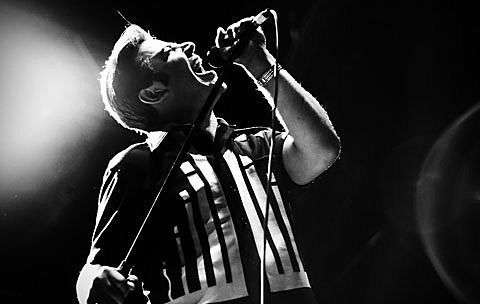 For the curious, J & R Musicfest & Tech Expo won't be just demos of the latest wi-fi enabled equipment. Over four days, the annual "fest" will dedicate two days to free shows across from its downtown location (at City Hall Park) featuring performances by J Cole, Alexis Jordan, Marsha Ambrosius, and Eli "Paperboy" Reed between August 27th and August 28th. Full lineup is below.

For those in need of urgent sweet soul crooning, you can get your fix TONIGHT (8/25), as Eli "Paperboy" Reed will also sit in as a special guest at Rockwood Music Hall with The Sweet Divines. Mr. Reed won't be the only guest sitting in with the band, as Dap Kings guitarist Binky Griptite, soul songstress Maxine Brown, and Inyang Bassey (backing vocalist for Moby) will all get the assist (in addition to an opening set from Bassey and Griptite).

Tonight isn't his only appearance with The Sweet Divines either, as both will ALSO appear at the 2010 edition of the Brooklyn Soul Festival held at the Bell House on 10/8 and 10/9 (though on different days). The two day festival will feature appearances from Barbara Lynn, Vernon Garrett, Don Gardner, and Reed on day one (10/8), as well as Betty Harris, Harvey Scales, Renaldo Domino, and The Sweet Divines on day two (10/9). Tickets are on sale for day 1, day 2, and a two day pass.

The Rockwood show flyer, J&R Fest lineup and times, and all Eli dates, below.... 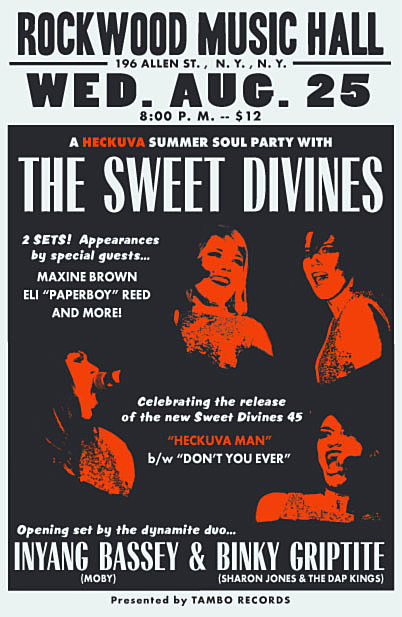