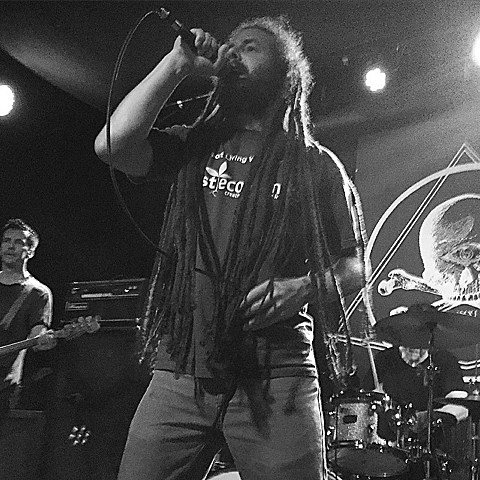 Twenty-five years to the day since the band's final gig, Soulside took the stage at Brooklyn's Saint Vitus. Over two nights, from the rumbling opening bass riff of "God City" to the lean punk of "Under the Glare," the band draws from their entire body of work. Many of us relative newcomers too young to have experienced Soulside during their initial run encountered the band via the CD collection, Soon Come Happy, which gathers the better known Dischord albums Trigger and Hot Bodi-Gram. Each of those albums is well represented here. From Trigger, which was recently reissued by Dischord and expanded to include the Bass • 103 single, we get some of Soulside's signature tracks: "Baby," "Trigger," and "Name in Mind." They play almost all of their final record, Hot Bodi-Gram, the highlights of which are "God City," "Pembroke," and the duo of "New Slow Fucky" and "New Fast Fucky."

For longtime devotees--or simply those old enough and hip enough to have been there--"Under the Glare," and "Lookin' Around" date back to 1984 when the band was called Lunchmeat. And from the band's first album Less Deep Inside Keeps, originally released in 1987 as a joint venture between Dischord and Sammich (another essential DC Hardcore label), they play "Pearl to Stone," "Fresh Air," "Other Side," and a cover of Wire's "Ex-Lion Tamer." [NYC Taper]

DC/Dischord post-hardcore vets Soulside were only around briefly from 1986 to 1989 before disbanding and having three of its members form Girls Against Boys, but the band finally got back together this month to play their influential, 25+ year old material at NYC and DC shows. The shows happened on either side of the DC premiere of Salad Days: A Decade of Punk in Washington, DC 1980-1990, which premiered in NYC back in November

The NYC shows took place at Saint Vitus this past Wednesday (12/17) and Thursday (12/18) with support from Have Heart/Verse/Dropdead/Soul Control-related band Sweet Jesus. Both shows sold out well in advance. Were you one of the lucky ones that got in? How was it?

NYC Taper caught both Vitus shows and wrote the review that's quoted above. He's also got downloads/streams of both nights at his site. Watch a full set video of night 1 (via unARTig) and check out the setlists for both nights, below.

Other guests in attendance at Vitus included Ted Leo and Rick Froberg (of Drive Like Jehu, Hot Snakes and Obits, who play NYC on NYE), who Soulside/Obits drummer Alexis Fleisig took an Instagram with:

Saint Vitus video and setlists below...