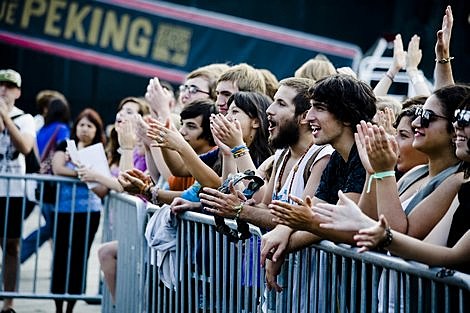 Bill Pearis teamed up with the folks behind the South Street Seaport concerts to put together a "Lunchtime Series" of free shows at Pier 17 this summer...

"Go local! We're kicking off another season of the Fulton Stall Market with a series of lunchtime concerts every Wednesday in June. Grab a snack from one of the market's farmers and purveyors, then head over to the Seaport stage for a set from some of New York's freshest bands -- playing in more organic form than you may be used to hearing."

Now for at least 5 days, those who work around Wall St can spend their lunch hour checking out a band they might otherwise have to visit a venue in Williamsburg to see. It's every Wednesday in June, and this Sunday, May 30th. Bill will DJ from noon-1, and then the band plays from 1-2. This is similar to what happens at Metrotech in Brooklyn on Thursdays.

Bill will talk more about this week's show (North Highlands), and the rest of the schedule, in his weekly posts. For now, check out the full schedule below...

May 30: North Highlands
"Formed less than a year ago, North Highlands have quickly become one of New York's best new bands, thanks in great part to the quintet's captivating live shows. Centered around the songwriting and ethereal voice of singer-keyboardist Brenda Malvani, North Highlands's dreamy orch-pop is warm and inviting like early summer afternoon. The band recently claimed a coveted spot on The L Magazine's annual "8 NYC Bands You Need to Hear" issue and are currently in the studio working on their debut album."

June 2: Air Waves
"Imagine a version of The Velvet Underground fronted by Mo Tucker that also featured Neil Young, and you're in roughly the same sonic space as Brooklyn's charming Air Waves. Singer Nicole Schneit's songs are deceptively simple, packing perceptive lyrics and hypnotic grooves into less than three minutes. For more, seek out Air Waves' singles on Catbird and 1928 Recordings, or download their excellent Daytrotter session for free."

June 9: The Austin McCutchen Quartet
"Missouri resident Austen McCutchen moved to hipster capital Williamsburg, Brooklyn in 2007 but there's not a hint of irony in the dusty country music he performs. While you'll find him at clubs fronting his ace electric band, for this performance Austin will be playing with his bluegrass quartet, complete with upright bass. If you like what you hear at the Seaport, be sure to pick up his new self-titled EP."

June 16: Ribbons
"Jenny Logan has played bass in two of NYC's sunnier sounding bands (World Atlas and My Teenage Stride) but her own songs, unleashed in Ribbons, are dark and stormy. With nods to brittle, late-'70s post punk, Ribbons sound like no other band in New York. Check out last year's excellent Surprise Attacks for more. Logan is moving to the Pacific Northwest later this summer, so this will be one of our last chances to see Ribbons for the foreseeable future. Don't miss it."

June 23: The Beets
"Dripping with equal parts attitude and reverb, The Beets are the best thing to come out of Jackson Heights, Queens since Indian food. The band were a 2009 pick for The L Magazine's annual "8 NYC Bands You Need to Hear" issue and have toured with Vivian Girls and the Mountain Goats. Check out the trio's signature folk-meets-punk sound on their 2009 debut, Spit in the Face of People Who Don't Want to Be Cool."

June 30: Toys and Tiny Instruments Band
"Exactly what it sounds like. www.myspace.com/toysandtinyinstruments"