"Then there's the instore at Sound Fix in Williamsburg. I had not decided what to expect so I was extremely pleasantly surprised to find the room full of people from far and away. While not as prepared as I should have been, it was so freeing to be doing some new songs again. And some of the stuff I did doesn't even feel that new anymore, as they are tunes I wrote last year. I couldn't have asked for a better audience to nervously preview new material in front of. The heat was crazy in there, and yet the audience were totally chilled out and cool during the whole set. Thanks a lot." [Sondre Lerche]

"The day started at Sound Fix on Brooklyn’s legendary Bedford Avenue. Shortly after noon, the crowd descended upon the café in back of the shop. As Matt and Bonnie unrolled their guitar leads, customers drank coffee, tea and things of a stronger nature (like liquid cocaine). This show, needless to say, was a roaring success." [Drag City Newsletter]

"The Oakland band Rogue Wave played an in-store performance at Brooklyn's Sound Fix a few weeks ago. It was scheduled for 12:30 pm on a Saturday, which is insanely early for a music event or anything involving travel from one part of Brooklyn to any other. We gathered at the record store clutching giant cups of coffee and stared blearily at the band, who stared blearily back." [Glorious Noise] 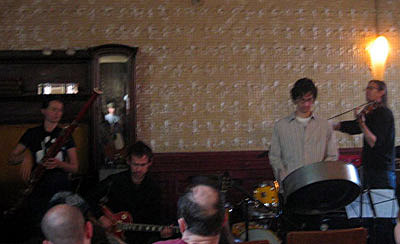 photo via The Secret Life of Antlered Girls